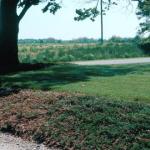 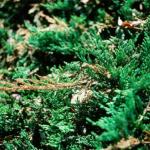 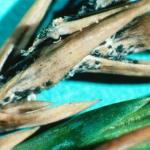 The fungus Kabatina juniperi causes Kabatina blight and canker of juniper and other members of the cypress family.

Shoots infected with Kabatina blight show no symptoms during the season they are infected.  Early the following spring the infected foliage turns pale green to yellow.  As the season progresses infected shoots turn brown and die.  Black pinhead-sized fruiting structures often appear at the base of dead twigs.

The Kabatina fungus survives within infected foliage and branches. Pruning creates wounds, so during dry weather remove and dispose of infected plant parts to improve appearance and reduce Kabatina blight inoculum in the planting.  Reduce the ability of Kabatina spores to infect plants by promoting rapid foliar drying.  If overhead irrigation is used, water before midday so the foliage dries rapidly in the afternoon.  If the plants are shaded or crowded, prune adjacent plants to improve air circulation and sunlight penetration.  In addition, protect vulnerable conifers from winter drying.  If the site is particularly conducive to Kabatina blight, replace susceptible plants with conifers better adapted to the site.  Fungicide control of Kabatina blight is useful under specific conditions, but is difficult to time because infections follow injury to older tissue.  Prompt application of fungicides after wounding events, especially if conditions are wet, can protect wounded tissue from infection, and reduce extensive secondary damage to affected plants.