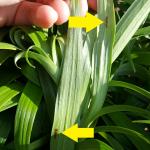 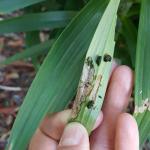 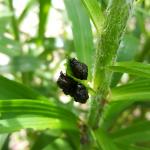 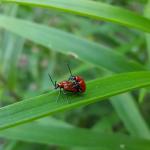 If you grow lilies, then be well aware of the lily leaf beetle, its life cycle, and how to manage this pest. Lily leaf beetle (Lilioceris lilii) is known to lay its eggs and develop only on true lilies, Lilium species (Turk's cap lilies, tiger lilies, Easter lilies, Asiatic and Oriental lilies), and fritillaria (Fritillaria sp). Daylilies (Hemerocallis spp.) are not hosts for lily leaf beetle. Although lilies and fritillaria are the primary hosts, lily leaf beetle also feeds, sometimes just lightly, on a number of other plants, including lily of the valley (Convallaria majalis), Soloman's seal (Polygonatum spp.), bittersweet (Solanum spp.), potato (Solanum tuberosum), hollyhock (Alcea spp.) and various hosta species. Lily leaf beetle is not known to reproduce or complete its life cycle on these other, inconsequentially impacted, plants. It is however, a devastating pest to true lilies.

The lily leaf beetle (LLB) is native to Europe and was discovered near Montreal, Canada in 1943. Its damage was limited to the Montreal area for decades, until discovered in the United States in 1992 in Cambridge, MA. It is thought that LLB arrived in a shipment of lily bulbs from Europe. Since then, LLB has spread throughout much of Massachusetts and is working its way throughout New England. Lily leaf beetle has been reported in Maine (1997), New Hampshire (1997), Rhode Island (1999), Connecticut (2001), Vermont (1998), and New York (2000). Based on the wide geographic and climactic range of the beetle’s native distribution throughout Europe and Asia, this insect is likely to establish across much of North America. Lily leaf beetles are strong fliers and are also moved from one area to another on host plants. Both the immature stage and adults cause damage by eating the leaves and buds. Adults and larvae are commonly found together devouring lily foliage. Often, they consume all the leaves, leaving only bare stems behind.

As soon as lilies break through the ground, over-wintered, bright red adult lily leaf beetles will begin to actively feed on the foliage. The adult beetles are about ½" long with a very bright red body, and black legs, head, antennae, and undersurface. In warmer locations in Massachusetts, this emergence has occurred around the middle of April. The beetles begin foraging for food and seeking a mate. The adult beetles will then lay eggs on the undersides of leaves, usually in May. The eggs are irregularly-shaped and laid in rows (of 2-16 eggs each) that appear as tan-colored lines. Just before the eggs hatch, they will turn orange and then a deep red color. The eggs hatch within 4-8 days into the immature or larval stage. The larvae are slug-like in appearance with soft, plump orange, brown, yellowish or even greenish bodies and black heads. The young larvae initially feed on the undersides of the foliage but eventually will move to the upper surfaces and the buds. While they feed, the larvae pile their own excrement on their backs which makes them objectionable to hand-pick. This coating of excrement, also known as a ‘fecal shield’, may help deter predators according to some research. Other studies indicate that the fecal shield may be used by some parasitoids of the lily leaf beetle to help them to locate their host. The feeding done by the larvae is the most destructive and lasts for 16-24 days. Larvae pass through four instars which can be told apart based on the size of their head capsule. The larvae then drop to the soil where they construct a white cocoon in which they pupate. The pupae themselves are florescent orange. Adult beetles emerge 16-22 days later and can be seen feeding throughout the rest of the growing season. Adult beetles over-winter in sheltered places, such as in soil or plant debris in the garden or woods, not necessarily near the host plants. Adults prefer areas that are shaded, protected, cool, and moist. The over-wintered adults emerge early in the spring and begin the cycle again with feeding, mating, and egg-laying. Each female beetle produces 250-450 eggs. There is one generation per year.

If your customers only have a few plants in their garden, hand-picking adults, eggs, and larvae can be effective. For more than a few susceptible plants, pesticide treatments may be needed. Products containing neem oil, a botanical insecticide, have been shown to kill very young larvae but must be applied every five to seven days after egg hatch. Products containing spinosad, a microbial insecticide, may also be effective. However, spinosad is toxic to pollinators until it has dried (in about 3 hours), so do not apply products containing spinosad to plants in bloom. Before recommending a product or applying any pesticide, read the label and apply only as directed. Additional active ingredients may be labelled for use against leaf beetles or their larvae, but read and follow all label instructions for safety and proper use.

Research at the University of Maine suggests that certain lily species limit the survival of lily leaf beetle eggs and larvae. They report that Asiatic hybrids may be the most susceptible species, while certain Oriental lilies and other hybrids may provide some resistance, including: Lilium henryi ‘Madame Butterfly’, Lilium speciosum ‘Uchida’, and Lilium ‘Black Beauty’.

Research efforts to manage the lily leaf beetle have concentrated on classical biological control which acquaints natural enemies (from the pest’s native range) with their host in its introduced range. LLB came from Europe so European parasitoids were released with the intent of establishing and distributing themselves to provide long term control rather than needing to provide regular releases each year.

Researchers at the University of Rhode Island and their collaborators have identified three parasitoids (wasps) that are specific to the genus Lilioceris and were approved by the USDA APHIS PPQ for field release. These parasitoids cause a high level of parasitism in lily leaf beetle populations throughout Europe. Tetrastichus setifer, Lemophagus errabundus, and Diaparsis jucunda have been a part of release, recovery, establishment, and distribution studies in New England from 1999 – 2016 and beyond. T. setifer is a gregarious larval parasitoid native to a large range in Europe and overwinters as mature larvae in host cocoons in the soil. Because of the large range of climatic conditions T. setifer survives in its native distribution, it is likely the best candidate for controlling lily leaf beetle in the Northeast. L. errabundus is a solitary larval parasitoid that overwinters as a teneral (freshly molted) adult in the host cocoon in the soil and is also native to Europe. D. jucunda is also a solitary larval parasitoid native to Europe and attacks all larval instars of the lily leaf beetle. Tewksbury et al 2017 reports releases of T. setifer in Wellesley, MA (and establishment and spread); Waltham, MA (establishment was not confirmed in Tewksbury et al 2017); and Cumberland, RI (establishment and spread). They also report releases of L. errabundus in Kingston, RI and Plainville, MA (establishment and spread were confirmed in Plainville). D. jucunda was released in Cumberland, RI (establishment confirmed) and Orono, ME (establishment confirmed nearby the release site).

The University of Maine: https://extension.umaine.edu/publications/2450e/