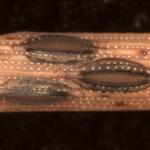 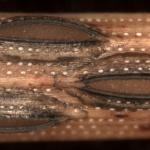 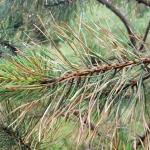 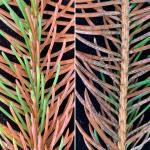 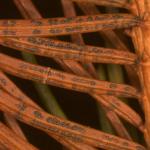 There are many species of Lophodermium that attack pine (Pinus), spruce (Picea), true fir (Abies), juniper (Juniperus), false-cypress (Chamaecyparis), arborvitae (Thuja) and incense-cedar (Calocedrus) across the globe. In southern New England, L. seditiosum is primarily found on two- and three-needle pines along with eastern white pine (P. strobus). On spruce, L. piceae is found causing disease but does not appear to be common. Additionally, L. juniperinum can be regularly encountered on landscape junipers, especially prostrate cultivars.

Two- and three-needle pines (P. mugo, P. nigra, P. resinosa, and P. sylvestris) grown as Christmas trees and ornamentals are most severely affected while eastern white pine is resistant. Ornamental spruce can sometimes harbor significant infections, while ornamental junipers are regular hosts but the damage is limited unless the plants are stressed.

Lophodermium infects the current season's foliage, which is often killed before the next growing season. Infected needles may develop yellow spots in late summer to early autumn before finally becoming yellow to brown. The symptoms first appear at the needle tips and will slowly progress to the needle base. Dead needles may not abscise normally and can linger in the canopy into the next growing season. The spore-bearing structures (apothecia) can be readily visible on diseased needles. They appear as black, football-shaped lesions scattered along the center of the needle and when moisture is plentiful they split longitudinally, allowing a clear mass of spores to extrude. Spore dispersal occurs from August into November with the majority of infections occurring in late summer during extended wet periods.

Young trees with dense canopies are especially susceptible to infection and injury, as humidity and free moisture are more abundant. Prune out heavily diseased branches and remove any dead stems/branches, especially those in the lower canopy, as Lophodermium can overwinter in woody tissues. Cover discarded needles around the base of the tree with mulch to limit sporulation the following season. Promote aeration and avoid watering practices that wet the foliage when the fungus is most actively sporulating (late summer to autumn). For chemical control to be effective, it must take place between July and September; apply three to four treatments at 14–21 day intervals during this time. Labeled fungicides include: azoxystrobin, thiophanate-methyl, copper hydroxide + mancozeb, mancozeb and triadimefon.