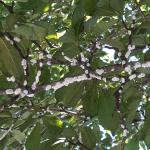 The magnolia scale (Neolecanium cornuparvum) can grow up to ½ inch in length, making it one of the largest native scale insects found in the United States. Its host range stretches across the eastern US wherever magnolia, its sole host genus, is found. This soft scale produces copious amounts of honeydew (sugary liquid excrement) as a result of feeding with piercing-sucking mouthparts on host plants.

There is one generation of magnolia scale per year, with three life stages: crawler, nymph (immature), and adult. Magnolia scale overwinters as nymphs on one- and two-year old twigs of the host plant. Overwintering nymphs are in the first instar and dark/slate gray in color with a red to brown ridge in the middle of their elliptical bodies. On a 5 cm. section of an 8 mm. twig, as many as 278 overwintering magnolia scale nymphs have been reported in the literature (Johnson and Lyon, 1991). They leave dormancy in the spring, growing larger over the summer months as they feed on host plant sap. In New York, the first molt is reported in late April or May and the second by early June. By June, the scales are a deep purple color. They also secrete a white, powdery, waxy substance that covers their bodies. During this time, magnolia scale secretes honeydew that falls on lower leaves, the ground, and anything underneath the tree. Honeydew is quickly colonized by sooty mold, a black fungus that often serves as the first sign of a possible magnolia scale infestation. In late July/early August, nymphs mature into adults. Female magnolia scale adults have a soft, oval-shaped light brown body and can reach up to ½ inch long; their brown color is quickly obscured by the white waxy coating they produce. Male adults are small winged insects that resemble flies. Males mate with females and then die. Females give birth to live young, called crawlers, in late August. Crawlers are the mobile stage of the magnolia scale. They are also oblong and flatter than adults, and range in color from yellow to reddish-brown. Crawlers walk to find an appropriate spot and then settle down to overwinter, particularly on new growth.

Potential damage caused by the magnolia scale is twofold.

First, as magnolia scale extracts fluid from its host, it damages the plant. At best, growth may be slowed. At worst, twig and branch dieback and even host tree or shrub death can occur. To avoid this, management may be necessary when magnolia scale is detected. Some sources report that a reduction in host plant foliage and flower production may result from magnolia scale infestation.

Second, the liquid sugary excrement known as honeydew secreted as a byproduct of digestion serves as a substrate for sooty mold. Honeydew and sooty mold may be found on any surfaces beneath infested host plants, including branches, trunks, and leaves of plants, and also lawn furniture, vehicles, decks, or other objects beneath the infested magnolia tree. Plants may look untidy in appearance. Honeydew, high in sugar content, is also attractive to stinging insects such as ants, bees, and wasps.

Check first and second year growth for overwintering nymphs, and then again in August for adult females and crawlers. By July, large amounts of honeydew and sooty mold may be visible on infested trees. Because this species is so large, they should be easy to find and identify on susceptibles hosts at that stage. However, note that the tuliptree scale (Toumeyella liriodendri), which feeds on yellow popular, tulip trees, and magnolia, is often mistaken as magnolia scale. To discern between the two, use these characteristics:

For more information on differentiating between magnolia and tuliptree scale, see "Differentiating Magnolia Scale from Tuliptree Scale" in the Resource section below.

Due to their large size, light infestations of magnolia scale can be removed by hand by softly brushing them off the plant and into a collection container with soapy water. If using a soft brush or sponge, be gentle so as to not damage the host tree bark. This should be done in July as soon as the still maturing females are noticed, and before early August, when crawlers emerge from the females. Otherwise, the crawler stage may be missed by this process.

On heavily infested trees, prune out severely infested branches and destroy. (When possible without disfiguring the tree.)

Although both the larvae and adults of some lady beetle species prey on magnolia scale, typically this will not provide enough management to reduce or prevent damage in a major outbreak of this insect. Adults of the multicolored Asian lady beetle (Harmonia axyridis) and larvae of the signate lady beetle (Hyperaspis signata), as well as exit holes from the emergence of parasitoid wasps have all been observed on various life stages of this native insect.

Magnolia scale can be managed using insecticides at several life stages, but the insect is most vulnerable when in the crawler life stage. Using a registered insecticide to manage the magnolia scale during late August, when crawlers are active, can be very effective. To help time the application with crawler emergence, monitor any adult females that were not removed mechanically with a hand lens. Double-sided sticky tape can also be helpful when monitoring for crawlers by tapping infested branches and observing any insects that become stuck. Contact insecticides can be applied directly to the crawlers to manage magnolia scales. If the crawlers are still beneath the females, they may be protected from insecticide applications.

Earlier in the season, overwintering first instar nymphs can be managed with a dormant oil (horticultural oil). Make a thorough application to the first and second year old twigs if magnolia scale has been detected. Thorough coverage is important. Apply before bud swell and when temperatures and weather conditions allow, according to label instructions to avoid phytotoxicity.

Systemic insecticides may be applied as a soil drench after bloom to manage magnolia scales while reducing risk for pollinator populations attracted to blooming plants.

Always read the entire label of any pesticide product before use. Ensure that you are using it in a manner consistent with the labeling. The label is the law. No product should be used in a manner that is contrary to its label. Read and follow all label instructions for safety and proper use. Make sure that the product you select is labelled for use against the pest you wish to manage, on the site to which it will be applied. *Neonicotinoid insecticides cannot be applied to trees or shrubs in Massachusetts except by an individual with the proper licensure or certification from the MA Department of Agricultural Resources.