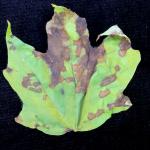 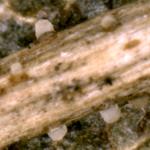 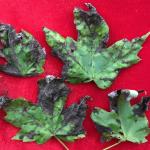 All native and non-native maples commonly planted as woody ornamentals are susceptible to infection, such as: sugar (A. saccharum), red (A. rubrum), Norway (A. platanoides), silver (A. saccharinum) and Japanese (A. palmatum) maples.

Maple anthracnose is often a minor disease that only reduces the aesthetic value of infected trees. Under ideal conditions, however, the disease can be severe, leading to premature defoliation and contributing to decline when other diseases and/or insect pests are present. Healthy trees may undergo defoliation in spring shortly after leaf out but are able to flush a new set of foliage and recover. Young trees are more susceptible to lasting damage while older, established trees typically suffer only minor growth losses. Symptoms vary by host and by the fungal pathogen present but are characterized by irregularly-shaped, angular spots or blotches that occur primarily along the midrib, primary veins and leaf margins (Figure 1). Lesions on Norway maple tend to be narrow, purplish-black streaks along leaf veins. On sugar maple, lesions occur along primary veins and appear as large, brown blotches. On Japanese maple, lesions occur along primary veins and leaf margins and appear as tan-colored, papery spots. Anthracnose fungi overwinter within senescent leaf tissue and in infected twigs and buds. In the spring, fruiting bodies are produced and spores are spread by wind and splashing rainwater. Anthracnose fungi produce asexual spores (conidia) within pads of tissue known as acervuli, which appear as dark-brown to black spots within leaf spots and blotches. Acervuli can be found on the upper or lower leaf surface and along veins or midribs (Figure 2). Spores are produced whenever environmental conditions allow (mild and wet) from spring through late-summer, but are typically most abundant in late spring and early summer. Symptoms on twigs and buds are less common on maples but under high disease pressure, young shoots may be killed.

Infected leaves are the primary source of inoculum and should be removed from the site. If the disease is severe, infected shoots should be pruned out, as they can also harbor the pathogen. This sanitation practice will reduce the amount of spores present to infect new leaves and shoots the following spring and throughout the next growing season. Maintaining tree vigor through adequate fertilization, watering, mulching and pruning will help lessen the impacts of the disease. Sugar maple prefers calcareous soils and many respond well to lime applications if soil pH is too low. Anthracnose is often an aesthetic issue on maple, but there are situations where the disease can cause permanent damage and chemical control may be warranted. These situations include when: young trees are heavily infected; trees are suffer from insect defoliation for consecutive years, and; trees are in decline due to environmental stress or attack by insect pests or other disease-causing organisms. If necessary, labeled fungicides can be used to protect at-risk trees. The following products are labeled for use against anthracnose of maple: copper hydroxide + mancozeb, mancozeb and propiconazole. The first application should be made at or just before bud break to protect new growth from initial infection in spring. Additional applications may be required at the labeled interval, especially if prolonged periods of wet weather occur.