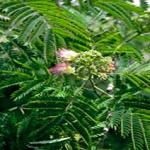 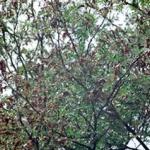 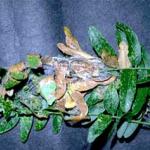 In the southern states, this is a serious pest of Albizia (Mimosa or Silk Tree) but in the northeastern United States it primarily feeds on many varieties of honeylocust (Gleditsia triacanthos) and is considered to be a serious pest.

Injury consists of tying foliage together with silk and then skeletonizing the foliage giving it a bronzed appearance. Injury can range from mildly aesthetic to defoliation. In late summer, larvae seeking protective over-wintering sites may temporarily become a nuisance by climbing on houses or other structures.

Small adult moths appear in mid-to-late June in southern New England and lay their eggs on the surface of the foliage. Larvae hatch soon thereafter and begin tying foliage together with silk. Feeding continues throughout July, pupation occurs, and new moths appear in August. The pupae of this second generation over-winters on the host plant. GDD: 1000-1600

Bacillus thuringiensis (B.t.) is effective if used on the earlier instars. Coverage with contact pesticides is difficult to obtain given the cryptic nature of how this pest hides itself on the host plant. Chemical pesticides are also labeled for this pest.