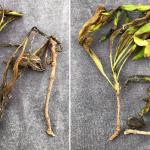 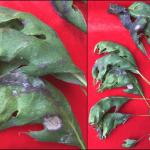 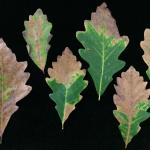 Most often, oak anthracnose causes only minor damage to landscape oaks. However, after prolonged periods of wet weather early in the growing season, especially on members of the white oak group, damage can be severe. Symptoms first appear as water-soaked, blighted leaf margins or as blotches along primary veins as new foliage develops. Over time, lesions become dry, papery and gray-colored. Pubescent leaves can become distorted or shriveled and may be shed prematurely from the canopy. Mature leaves are more resistant to infection, having developed their thick, waxy cuticle and lesions on these leaves are often smaller in size. Apiognomonia produces the majority of its spores asexually from pads of fungal tissue that rupture through the surface of the leaf and petiole. They are very difficult to see, even with a hand lens. The pads (known as acervuli) can be found on the upper or lower surface of the leaves, along the veins or midribs, while on twigs, they appear orange-brown and darken over time. Spores are spread mostly by wind and running or splashing rain water. Twig infections are known to occur on white, black, red, and scarlet oak and may occur on other species as well, especially if wet conditions persist into mid-summer. Twig dieback may lead to secondary colonization by wood-boring insects (e.g. Agrilus) and stem cankering fungi (e.g. Botryosphaeria). Disease outbreaks usually subside by mid-summer when conditions become warmer and drier. In autumn, when cooler weather returns, there is often resurgence in disease development as the pathogen exploits senescing foliage. Resting structures then develop, which allows the pathogen to overwinter. In the spring, spores are produced from surviving propagules and the cycle repeats. When healthy trees are defoliated early in the season, most have the reserves to produce a second flush of foliage and suffer only minor growth losses. When oaks are weakened by other stresses, such as gypsy moth or Armillaria root and butt rot, the effects of oak anthracnose are amplified.

Anthracnose infections typically begin in the lower canopy and progress upwards. This is because shade and free moisture are more abundant in the lower canopy. Because many oak species exhibit marcescence (incomplete leaf abscission after senescence), infected foliage is allowed to persist in the canopy over the winter. This can provide the primary inoculum for infection of newly developing foliage the following spring. Additionally, anthracnose fungi can live dormant within infected twigs until conditions become favorable for growth (mild and wet). Therefore, management of anthracnose fungi can be very challenging, especially when cloudy and wet weather lingers as new foliage is developing. Chemical control is not usually warranted, but foliar sprays can be effective when performed early in the season before bud break and on labeled intervals when immature foliage is most susceptible to infection. In general, anthracnose fungi don't present a major threat to established, healthy trees. However, in conjunction with other stresses, anthracnose can play an important role in tree death. Prune and discard dead stems and branches and thoroughly remove all fallen leaves in autumn and spring as they harbor the fungus and allow inoculum to remain at the site. Maintaining tree vigor through adequate fertilization, supplemental watering (if possible), mulching to help moderate soil temperatures and pruning of dead branches will help oaks to prosper despite the presence of disease. At the same time, it is important to note that spores can travel long distances and anthracnose fungi like Apiognomonia are widely abundant in both forest and landscape settings. This makes eradication of the fungus unlikely in most situations.