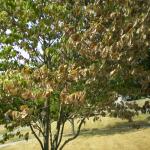 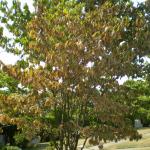 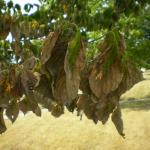 Massachusetts experienced a pretty serious drought situation during the 2016 growing season. As of mid-August 2016, the entire state of Massachusetts was classified as being in some state of a drought, with sections of the state actually being considered as “extreme” drought status (D3). Not to be confused with simply high temperatures alone – which are also common in the summer – drought conditions relate more specifically to the state of an extended period of dryness in the environment, which of course may be facilitated by periods of hot weather and low humidity. More formally defined, a drought is a moisture deficit bad enough to have social, environmental or economic effects. While certainly there are other areas of the nation in an even more severe state of drought (parts of California are frequently considered “D4” or in an “exceptional” state) than we are here in the Northeast, there remain some very important considerations as it relates to the environment around us.

Here in the Northeast, the growing seasons of 2010 and 2012 have been considered the hottest growing seasons on record, with precipitation levels that were more than 50% below normal (i.e. drought-like conditions) in some of those years. As early as July, even mature established trees looked like their leaves had been burned with a torch. This sent many species – especially those that were already declining or stressed due to other factors – into a more rapid state of decline and in select circumstances, even immediate death. That following spring, both municipal and private sector tree care specialists were faced with specimen after specimen of urban trees simply not leafing out, or attempting to make one last spring “flush” before running the last lap of the mortality spiral. Since growing seasons are not isolated but rather woven together like the pages of a book, we know that the effects associated with an acute extreme heat-drought situation like that of the 2010 season may be expressed by plants some 5 – 10 years after the initial event (George Hudler, Ph.D., Cornell University). Therefore, we should look at the drought conditions that we are currently experiencing this season not as an isolated event, but more of a furtherance of the serious stress event that our trees have already experienced in recent years.

Whether we care for miles of streets and acres of parks populated with trees, or one important specimen on our property, the question remains: what do we do? Like any well thought-out approach, the answer should combine careful monitoring and prescription treatment (to the degree resources allow) with special attention being given to the patients that may need it most: new plantings and drought-sensitive species like ornamental cherries (Prunus spp.), certain maples (Acer saccharum, Acer palmatum), eastern hemlock (Tsuga canadensis), katsura (Cercidiphyllum japonicum), yellowwood (Cladrastis kentukea) and amelanchier (Amelanchier spp.) to name a few.

As we may know, both allelopathic-generated antagonism from certain turfgrass species and competition for resources like water and nutrients with other plants can be a detriment to tree root populations, so we need to make sure that vegetation within the vicinity of the base of the tree is not present as a competitive factor. Researchers and practitioners alike have long advocated the use of 2-3 inches of mulch around trees (but not contacting the actual stem) as another important method to help preserve soil moisture in the vicinity of the tree roots. Repeated field observations from University faculty has also led to the recommendation to use larger nugget-type mulch, rather than finely shredded-mulches that may be prone to “knit” together, forming a hydrophobic barrier in the landscape.

When it comes to watering – the essential ingredient in combatting drought stress – it is ideally administered slowly, like a steady rainfall. The use of a gator bag (a perforated, synthetic bag that disseminates an even flow of water) on appropriately sized trees aids this process tremendously, as does the use of a drip irrigation system on larger specimens. Sampling to a depth of 12-18 inches with a soil core sampler or moisture meter will help to ensure that water is reaching the appropriate depths and give the manager a better idea as to the timing of watering. Additionally, in drought-like conditions, administering supplemental water to new plantings that are in a site for up to 5 years (depending on the specimen and site conditions) may be necessary AND it may be necessary to extend the supplemental watering period into the fall months (October). It is also important to note that whether dealing with young or mature tree specimens, common tree maintenance activities (like pruning and fertilizing) should only be implemented selectively, in very specific situations – if at all, when under drought conditions.

Finally, keeping an eye on trees after they have been “nursed through” a tough growing season is a critical. Canopy thinning and premature leaf drop in following seasons are symptoms that may indicate that the tree continues to suffer the effects of a drought event. Additionally, certain insect and disease pests of importance may be more attracted to a tree that has been stressed by an event such as drought. These factors combine to make routine monitoring – and good record keeping – all the more important.

For more information, readers are encouraged to access the U.S. Drought Monitor map which is jointly produced by the National Drought Mitigation Center at the University of Nebraska-Lincoln, the National Oceanic and Atmospheric Administration, the U.S. Department of Agriculture at http://droughtmonitor.unl.edu/.   This site synthesizes many drought indicators into a single map that identifies areas of the country that are abnormally dry (D0), in moderate drought (D1), in severe drought (D2), extreme drought (D3) and exceptional drought (D4).