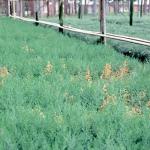 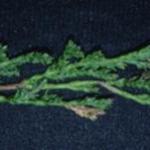 Immature foliage and shoots infected with Phomopsis blight turn yellow-green by late spring and brown by summer.  Mature foliage is resistant and remains unaffected, with only the newest growth sustaining damage.

Sometimes black fruiting structures are visible at the base of the brown tissue.  The dead portion of the shoot frequently remains on the plant for many months.

Infections in the spring are most common.  Small black fruiting structures produce Phomopsis spores within infected shoots from previous seasons.  Wind and water splash spread spores to young foliage and green twigs.  Mild, wet weather provides optimal conditions for spores to germinate and penetrate new growth.  Repeated spore release and infections occur as long as conditions are wet and there is succulent tissue on the plant.  Mature growth is not infected.  By summer, new fruiting structures develop in browned foliage and twigs, and Phomopsis can survive in the killed plant material for up to 2 years.

During dry weather, remove and dispose of infected plant parts to improve appearance and reduce Phomopsis blight inoculum in the planting.  Cut below the boundary of dead and healthy twigs to ensure removal of all the infection.  Reduce the ability of Phomopsis spores to infect plants by promoting rapid foliar drying when young growth s developing. If overhead irrigation is used, water before midday so the foliage dries rapidly in the afternoon.  If the plants are shaded or crowded, prune adjacent plants to improve air circulation and sunlight penetration.  If the site is particularly conducive to Phomopsis blight, replace susceptible plants with conifers better adapted to the site as well as resistant to Phomopsis infection.  Fungicide control of Phomopsis blight is useful if practiced along with the cultural suggestions above.  When conditions are wet, prompt application of fungicides protects immature tissue from infection.  If moist weather persists, repeat applications per labeled intervals to maintain protection.