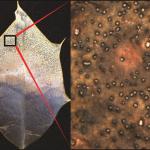 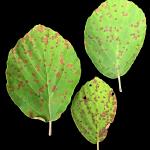 The most common hosts of Phyllosticta leaf blotch include witchhazel (Hamamaelis), hydrangea (Hydrangea), rhododendron/azalea (Rhododendron), holly/inkberry (Ilex), mountain laurel (Kalmia) and andromeda (Pieris). However, the fungus is able to infect a broad array of landscape trees and shrubs, mostly as a minor pathogen.

Phyllosticta species are opportunistic pathogens that cause leaf spots/blotches and a marginal leaf blight. When severe, large sections of the foliage can be diseased as infections expand towards the leaf base. In most landscape settings, Phyllosticta is not considered an aggressive pathogen, but the fungus is quite common and damage varies by year and region. Phyllosticta most often occurs in conjunction with winter injury on evergreens, readily colonizing and spreading on injured foliage. The fungus produces tiny, black fruiting bodies within the necrotic tissue and spores are easily disseminated to healthy foliage during wet weather. On some hosts, these black-colored fruiting bodies can be readily observed while on others they remain cryptic. Phyllosticta hamamelidis is specific to witchhazel and is very common in New England. Like all true Phyllosticta species, P. hamamelidis produces small, circular leaf spots that can coalesce to produce large necrotic blotches on infected leaves. In most cases, leaves harbor numerous blotches but where shade and moisture are abundant, entire leaves can be killed and plants can be disfigured.

Phyllosticta leaf blotch can be managed in landscape settings. The pathogen overwinters on infected foliage in the canopy and discarded foliage around the plant. During mild and wet weather in the spring, new infections are initiated. On broad-leaved evergreens like rhododendron and holly, prune out foliage damaged during the winter to reduce opportunistic colonization. On deciduous hosts like hydrangea and witchhazel, prune out badly infected leaves from the canopy and remove all prematurely shed foliage during the growing season. Even at its worst, the disease shouldn't be considered a major threat to the health of infected trees and shrubs. Pruning to improve sunlight and air flow can help to reduce disease pressure. Persistent wet weather provides ideal conditions for the fungus to grow and sporulate. Chemical management is rarely warranted, but the following fungicides may have some utility against Phyllosticta when applied early in the season as new laves are developing: copper salts of fatty and/or rosin acids, copper hydroxide, mancozeb and propiconazole.