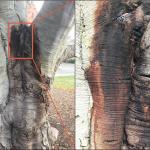 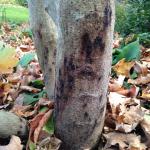 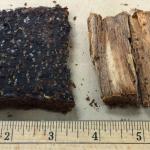 Phytophthora bleeding canker kills the bark and outer sapwood tissues of trees and shrubs. The most prominent symptom of the disease is dark-colored sap oozing from bark cankers. The fluid is typically reddish-brown and it stains the surrounding bark as it flows downward. Infected bark is often water soaked and stained while the inner sapwood can exhibit a range of abnormal colors (brown, bluish-green, orange and pink) depending on the particular species of Phytophthora present. The cankers typically have a well-defined margin that is clearly associated with the bleeding of sap observed from the trunk or scaffold branch. Phytophthora species do not decay wood; they consume sugars in the cambium and outer sapwood. However, the resulting death of the bark and outer sapwood can provide an infection site for wood-rotting fungi to invade at a later time. Research has shown that once Phytophthora invades the outer sapwood, the pathogen can be drawn upwards in the vascular tissue to create cankers higher on the trunk or on main scaffold branches.

The Phytophthora species that cause bleeding canker originate from the soil and may be causing root disease in addition to bleeding canker. They thrive in wet soils, which stimulate spore production and dispersal. Splashing rainwater spreads the spores from the soil to the lower trunk where infections establish in wounded bark. For European beech, soil compaction can result in the development of puddles around the base of the tree and bark wounding from vandalism (e.g. the carving of initials) provides the infection site. Once the tree is infected, Phytophthora survives as resting spores in the margins of the bark cankers. Foliar symptoms caused by Phytophthora bleeding canker reflect the disruption of water transport within the infected tree. Canopy symptoms include undersized foliage, early fall color and wilt (even when there is sufficient water in the soil), along with stunted shoot growth and blight of branches. It must be noted that bleeding cankers by themselves are not diagnostic of Phytophthora. Fungal (e.g. Botryosphaeria and Diplodia) and bacterial (e.g. Pseudomonas) pathogens are capable of causing bleeding cankers that appear very similar to those produced by Phytophthora. Therefore, accurate diagnosis is critical prior to management, as Phytophthora does not produce any visible signs in the field that can be used for identification.

Phytophthora bleeding canker is a chronic disease that progresses very slowly within infected trees. Research has shown that overland spread of the pathogen is rare, meaning that an infected tree at a site does not pose an immediate threat to nearby trees. Unlike many other chronic diseases of landscape trees, effective treatment for Phytophthora bleeding canker is possible. Applications of Phosphorous acid (e.g. Agri-Fos, Phostrol, Phosphite, etc.) have proven very effective against Phytophthora. Chemical application should take place in the spring as new growth is flushing and the entire lower trunk should be treated. If a carrier, such as Pentra-Bark, is used then extreme care must be taken to avoid application to the foliage or nearby plants due to the high phytotoxicity of the material. Avoid needless bark wounding from string trimmers, mowers and vandalism, especially close the soil line where splashing spores are most likely to contact the bark. Maintaining a thick layer of mulch around the base of susceptible trees can also help to prevent spore germination and dispersal from the soil. Avoid planting susceptible trees in locations with wet or saturated soils.