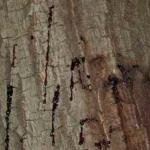 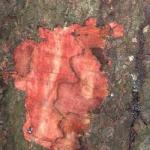 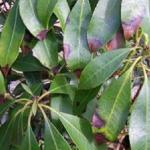 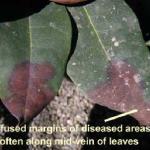 Phytophthora ramorum causes two types of diseases.  Bark cankers infect the inner bark, cambium, and phloem on several oak (Quercus) and tanoak (Lithocarpus densiflorus) hosts.  In certain areas of California and Oregon, bark cankers are fatal to oak and tanoak if the lesions girdle the trunk.  In addition, Phytophthora ramorum causes leaf spot and shoot blight on over 80 host plants including Acer, Camellia, Hamamelis, Kalmia, Lonicera, Magnolia, Pieris, Pseudotsuga, Rhododendron, Syringa, and Viburnum; all of which are currently on the federal quarantine list.  Plants that develop foliar blights and leaf spots usually do not die, but they may serve as a "reservoir" hosts for the pathogen.

On bark canker hosts, Phytophthora ramorum often produces "bleeding" cankers on the trunks and branches.  The formation of droplets of dark reddish brown liquid on the bark is not usually associated with bark cracks or insect holes.  If the outer bark is scraped away, black zone lines surround dead areas in the inner bark.  Once a bark canker girdles a branch or stem, the portion of the plant beyond that point dies.  Tree death may occur within several months to several years after initial infection.  Infected trees are attractive to opportunistic ambrosia and bark beetles, as well as secondary colonization by the sapwood decay fungus (Hypoxylon thouarsianum).

Cool temperatures (65o-70o F) accompanied by rain or overhead irrigation facilitate the spread of and infection by spores of Phytophthora ramorum.  Spores form on leaves of several hosts where splashing water and windblown rain disperse them onto nearby plants.  Long distance shipments of infected nursery stock inadvertently disseminated Phytophthora ramorum throughout the United States.  Certain foliar host plants support abundant spore production; so ongoing nursery surveys and quarantine are vital to reduce the risk of widespread distribution via the transport of these nursery plants.

West coast nurseries are not able to ship susceptible host plants unless they have met inspection requirements that ensure susceptible plant material is free of Phytophthora ramorum.  However, be especially observant of leaf spots and shoot blights on rhododendron, viburnum, Pieris, mountain laurel, and lilac plants.  Examine the foliage closely while keeping in mind that the Phytophthora ramorum symptoms on foliage look a lot like other foliage diseases as well as some types of environmental/cultural damage.  If you are not sure contact MDAR plant inspectors who have special training and experience with identifying potential Phytophthora ramorum-infected plants.  Plants infected with Phytophthora ramorum should be destroyed because no chemical control measures are currently available.  Because Phytophthora ramorum is a regulated organism, state regulatory officials coordinate destruction and disposal protocols.