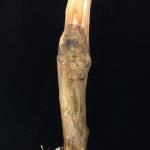 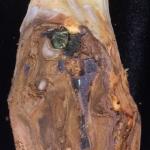 At the early stages of disease development, Phytophthora kills fine roots, gradually progressing towards larger diameter roots and finally to the crown at the base of the plant. Once a significant portion of the root system has been killed, aboveground symptoms become evident.

Canopy symptoms represent the disruption of water and minerals and typically include foliar wilt, early fall color or senescence, undersized foliage and foliar/branch dieback. In cases where infections are chronic and last for several years, stunted shoots and a gradual canopy dieback can be observed. For recently transplanted trees and shrubs with existing infections, little to no new growth will occur and a general decline is often observed. Infected cambium at the root crown and on primary lateral roots is tan to cinnamon-brown instead of a healthy off-white. Upon initial inspection of the roots, look for blackened, decaying roots and an absence of fibrous feeder roots. There are no visible signs of Phytophthora that can be used for identification in the field.

The Phytophthora species that cause crown and root rot live in the soil. However, some of these species are also capable of causing trunk and branch cankers along with a foliar blight. Phytophthora species thrive in flooded, wet soils as well as low-oxygen soil conditions. They produce an asexual swimming spore that is capable of spreading through natural waterways (ponds, streams and rivers) in search of a susceptible host. Soil compaction depletes available oxygen and gas movement to the roots, which inhibits normal root functions and makes plants more vulnerable to infection. Once a tree or shrub is infected, Phytophthora can persist in the surrounding soil for many years through a production of hardy resting spores. But, Phytophthora is not an effective saprophyte anddoes not persist very long in dead plant material.

Phytophthora root and crown rot is a very difficult disease to control. Avoid purchasing nursery stock that exhibits any of the canopy symptoms mentioned above. Thoroughly examine the roots of recently purchased stock prior to planting for symptoms of the disease. Do not plant susceptible hosts in wet soils or soils prone to annual flooding. Soil drench fungicides can be effective at slowing the development of the disease if it can be accurately diagnosed at the early stages. Registered chemicals include Mefenoxam/Metalaxyl, Phospohrous acid, Etridiazole, Etridiazole + Thiophanate-methyl and Fosetyl-Aluminum. Soil drench fungicides are not always effective due to leaching in the soil and an inability to reach the target roots. Proper planting depth and distressing of the root mass is important to minimize transplant shock upon planting. Maintain a proper mulch layer and provide regular irrigation for trees and shrubs transplanted in the past five years. Keep in mind that Phytophthora species are very abundant in the environment and complete eradication from the site may be difficult to impossible if soils are naturally wet or flooding occurs.