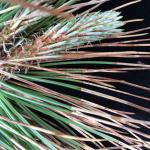 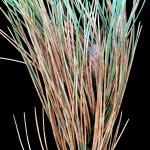 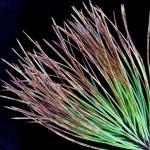 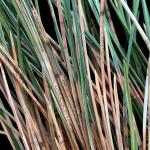 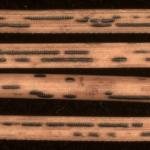 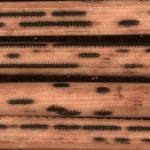 Ploioderma is widespread in eastern North America and attacks native and introduced pines in forests, landscapes and Christmas tree farms. Symptoms of infection generally take six to eight months to appear and include straw-colored, blighted needle tips and/or yellow to brown mottled spots that occur throughout the needles. Needles with blighted tips often remain green at the base. Small, black strips of fungal tissue are produced just below the epidermis on the blighted needle sections. These are known as apothecia. In late spring to early summer, the strips swell to become oval-shaped and rupture in the center to release large volumes of clear-colored spores that are spread by wind and splashing rain water. The spores initiate new infections on the current season's needles, yet symptoms will not appear until winter or late spring of the following year. Once needles become symptomatic, they are typically shed by the end of the summer. Most often, the lower canopy of susceptible pines sustains the most extensive damage.

Austrian pine can suffer significant damage or even death as a result of the disease. The damage is usually most severe on lower branches because of reduced air flow and higher humidity. Heavily infected shoots and branches should be pruned and removed from the site. Maintain tree vigor during extended dry periods by providig supplemental water, especially for young landscape and Christmas trees. Hard pines are adapted to full sun and when planted in shaded settings or tight rows, they become more susceptible to serious needle blight problems as they mature. Fungicide application may be warranted for high-value specimen trees, especially those prediposed by drought or insect feeding. Application should occur when new shoots are 0.5-2" long and as new needles are just emerging. Reapplications can be made at labeled intervals until needles are fully developed, depending on environmental conditions. Fungicides labeled for use against Ploioderma include: copper hydroxide, copper hydroxide + mancozeb, and mancozeb.