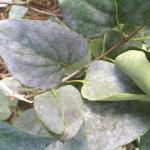 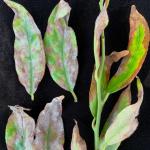 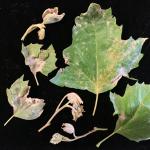 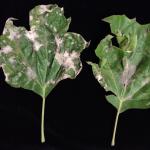 On trees and shrubs, the most common powdery mildew fungi include Erysiphe, Phyllactinia and Podosphaera.

Powdery mildew fungi are diverse and widespread throughout the world. Infections result in a range of symptoms that can include: reduced growth, lower fruit production or fruit blight, foliar scorch or blotch, premature leaf shedding and stem dieback. Most often, powdery mildew diseases are cosmetic and reduce the aesthetic value of landscape plants without having a major impact on overall health. Powdery mildew fungi often grow on the surface (epidermal cells) of leaves and green shoots. Their growth, known as mycelia, appears as a dusty, gray to white-colored coating on infected plant parts, hence their name. They absorb nutrients through tiny, tube-like structures (called haustoria) that pierce plant cells. When the diseases are more severe, the fungi are growing into internal cells beneath the epidermis.

Because many powdery mildew fungi produce superficial growth on the surface of infected plants, free moisture often inhibits their development and growth. As a result, they are most abundant during dry periods when relative humidity is high. Symptoms and signs of powdery mildew become visible in late spring depending on weather conditions and the manner in which the fungus overwinters. By late summer (August), they are most conspicuous on common hosts, such as lilac and oak. Infected foliage may appear off-color (chlorotic to purple), irregular in shape or size, or become scorched and blighted over the summer. On green shoots and buds, they cause curling and stunted growth. Late in the growing season, some powdery mildew fungi form small, dark-colored survival structures on the surface of infected plant parts, known as cleistothecia. These may be mistaken as insect egg masses or frass, similar to what would be seen after a lacebug infestation.

Typically, powdery mildew diseases are of minor consequence to otherwise healthy plants and do not warrant intervention. Furthermore, limiting powdery mildews by chemical application alone is seldom successful. Proper cultural practices are important for effective management. Where powdery mildew infections are a regular occurrence, disease-resistant species and cultivars should be selected for planting. Collect and remove discarded leaves to reduce inoculum available to start infections the following spring. When powdery mildew fungi overwinter in buds, remove and dispose of diseased twigs and branches. This practice is particularly important on plants such as rose and ninebark. Prune plants and space them well to promote good air circulation and sun exposure. Where appearance is critical or unacceptable damage is occurring, chemical treatment along with suitable cultural practices achieves satisfactory control. Chemical spray programs are most effective when symptoms of powdery mildew first appear.