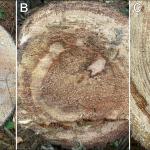 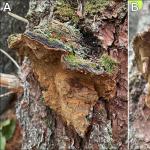 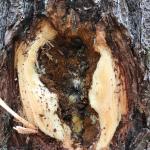 Red ring rot of conifers (also known as white pocket rot, ring scale, red heart and pencil rot) is caused by the fungal pathogen Porodaedalea. Previously, red ring rot was attributed to the actions of Phellinus pini (also known as Trametes pini and Fomes pini in older literature). However, several studies utilizing DNA sequences have clearly shown that multiple species of Porodaedalea are responsible for red ring rot of conifers in North America. Several Porodaedalea species are present in the eastern United States and Canada with overlapping host ranges. Further work is necessary to clarify the complex taxonomy of this important tree pathogen.

Damage & Signs of the Pathogen

Porodaedalea can be found throughout North America, Europe and Asia and is considered the most important wood-decaying pathogen of conifers. According to Boyce (p. 389; 1961), “Losses resulting from red ring rot far exceed those from any other decay.” For eastern white pine, red ring rot causes significant reductions in merchantable timber. In some cases, harvested logs may appear free of decay, but significant defect is encountered at sawmills. Based on a survey of 20 sawmills in Vermont, Abbott (1915) estimated that red ring rot was responsible for an 8% loss in value for white pine timber. Among all milled conifer lumber where red ring rot was discovered, the disease reduced lumber values by 50%. Pure white pine stands harbored the highest levels of disease. Two studies in Ontario also found that when decay was encountered in stands of eastern white pine, Porodaedalea was responsible for 76–90% of the volume loss, with the remainder caused by approximately 12 other decay fungi (Hepting 1971). Despite its importance, Porodaedalea has generated only limited interest from pathologists in recent decades and more current studies on volume losses in managed stands are lacking.

Porodaedalea invades susceptible white pines primarily through branch stubs and tops killed by the white pine weevil (Pissodes strobi) (Silverborg and Gilbertson 1962, Hepting 1971). However, many other types of trunk and branch wounds can also serve as infection sites, such as wind/ice damage or mechanical breakage during thinning operations. Red ring rot results in a selective delignification (white rot) of infected wood tissue. Small, elliptical decay pockets are lined with white cellulose fibers (Overholts 1953). In the early stages of decay, lignin is preferentially targeted over cellulose and hemicellulose. Because the cellulose is maintained, there are only minor reductions in wood strength. In these early stages of decay, the wood appears pink to purplish-red but remains firm (Fig. 1). Later stages appear as pockets or cavities, parallel to the grain, with white-colored, fibrous and stringy wood (Fig. 1). Black zone lines may be interspersed within the decaying wood at later stages and there may be resin embedded within in the outer sapwood. In milled lumber, the decay may appear as elongated streaks above and below branch stubs or other wounds that served as entry points (Silverborg and Gilbertson 1962). Decay caused by Porodaedalea is usually confined to the heartwood of infected conifers and can extend 10–20’ above and below conks, when present (Boyce 1961). While it can occur in the butt log, infections are primarily in the middle to upper trunk (Gilbertson and Ryvarden 1987). Porodaedalea does not act as a saprophyte of downed trees and does not decay finished products. Also, conks do not form on dead and downed trees.

Perennial fruiting bodies (conks) are variable depending on the host and species of Porodaedalea. On eastern white pine, the conks are small to medium-sized, generally hoof-shaped, and have a rough, reddish-brown to black-brown cap (Fig. 2). The pore layer is often yellow-brown to brown in color (Fig. 2). They primarily develop directly from the trunk or may occur beneath branch stubs where they attach to the trunk (Fig. 2). In some cases, conks develop in overlapping shelves. Unfortunately, conks are often absent on infected white pines and tend to be uncommon on trees less than ~100-years-old. That said, in some stands the conks can be readily produced on younger trees and may be locally abundant when numerous trees are diseased. When conks are observed on a white pine, there is a very good chance of finding additional infected trees in the surrounding area. At times, “punk knots” can be used to identify infected white pines, especially in conjunction with conks. Punk knots develop around branch stubs wounds and as appear as swollen, bulging sections with weeping resin. Underneath the bark are masses of yellow-brown fungal tissue embedded with infected wood and resin (Fig. 3).

Unless conks are present on infected white pines, it can be difficult to determine if the pathogen is present. In some cases, punk knots and weeping sap from branch stubs are diagnostic of the disease, but many white pines have irregular bulges and swellings on the trunk that are not associated with decay. Suspected punk knots can be confirmed by removing the bark and looking for the yellow-brown fungal tissue intermixed with infected wood and hardened resin. Older stands of white pine tend to harbor higher volumes of decay, but in some cases, younger white pines can have significant losses from the disease. Old stands of white pine should be carefully scouted for the presence of conks, especially in upper portions of the trunk. There are no known environmental variables that are associated with greater disease incidence and severity (i.e. elevation, soil type, aspect, stocking density, etc.). However, wet, bottomland sites with higher levels of shade and humidity and increase fungal growth and dispersal (Livingston et al. 2019).