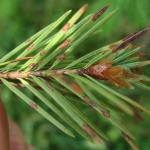 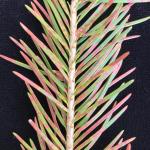 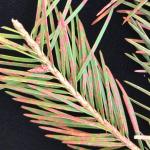 Rhadocline needle cast is caused by a complex of Rhabdocline species that are native to western North America. The currently recognized species include: R. epiphylla, R. oblonga, R. obovata, R. pseudotsugae and R. weirii. Presently, it's unknown which species have been introduced into the northeast.

Rhabdocline needle cast is found throughout the native range of Douglas-fir and wherever this tree is grown as a landscape ornamental or Christmas tree. The fungus causes needle browning and premature defoliation, leading to decreased vigor and exposure to secondary insect pests and pathogens. The needle loss also significantly reduces aesthetics and for Christmas tree growers, infected trees are often unsalable. Because of Rhabdocline needle cast (and Swiss needle cast), many Christmas tree growers in New England no longer grow Douglas-fir. Additionally, the use of Douglas-fir as a landscape ornamental is limited as well. Symptoms first appear in late summer to autumn as yellow-brown spots or blotches on both the upper and lower surface of current year needles. The lesions enlarge and become reddish-brown as the disease progresses. Infected needles may have one to several small lesions, or entire needles may be blighted in heavily infected trees. The disease often initiates and becomes most severe in the lower canopy due to increased shade, free moisture, humidity and decreased air flow. In late spring, the lesions begin to swell as the fungus produces fruiting structures below the epidermis. The epidermis splits along the length of the needle, exposing a mass of spores which are spread by wind and rain to newly emerged needles. The exact timing of spore dispersal is often dependent on the weather, but typically it occurs just after budbreak. There is one infection cycle per year.

Thoroughly scout trees for disease symptoms from autumn through early spring, prior to bud break. Prune out heavily infected shoots/branches from the lower canopy and remove severely infected trees to prevent spread of disease to healthy trees. Douglas-fir is shade intolerant and requires full sun to thrive. Trees planted in even partial shade are likely to develop needle blight problems over time. If the planting location is exposed to any shade during the day, do not plant Douglas-fir. If trees are planted in rows, maintain proper spacing and prune the lowest canopy branches to promote air flow. Avoid establishing ground cover plantings and remove weeds around the base, which can decrease airflow and allow moisture to linger. In locations where the disease is known to occur, or sites less than ideal for Douglas-fir, utilize seed sources with partial resistance to the disease. Among the most resistant varieties are Shuswap and Pillar Lake. Moderately resistant varieties are Santa Fe, Silver Creek and Coville, while San Isabel, Lincoln, Apache, Cibola, Kaibob and Coconino are the most susceptible to the disease. Fungicides can be used in an attempt to control Rhabdocline in landscapes and Christmas tree farms. Thorough coverage of all needles is required for effective control. Fungicide applications should take place once 50% of buds have broken and new growth has reached 0.5" inch in length. Subsequent applications should be made at labeled intervals until conditions no longer favor disease development. Three fungicide applications are usually required to achieve good control. Fungicides labeled for use include: copper hydroxide, copper sulfate, copper salts of fatty and/or rosin acids, mancozeb and thiophanate-methyl.