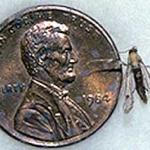 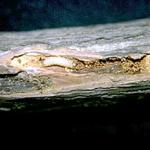 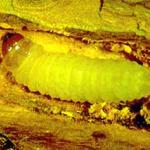 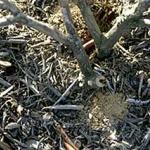 Early symptoms of attack, as described by Johnson and Lyon, appear to be drought stress, with foliage losing its color and dying. Entry holes are often near branch crotches or close to the ground on the main stem. Being a clear-winged moth borer, this pest expels sawdust and frass (excrement) from its tunnel during the early stages of attack. This material will accumulate near the entrance holes and on the ground. Infestations can be severe, especially in large plantings and much branch and plant death may occur.

Larvae over-winter within the host and pupation occurs in the spring right at the exit hole. Moths are active from late May through much of June, in Massachusetts. GDD for adult flight period is 192-707. Eggs are laid near wounds, roughened bark, branch crotches and pruning sites. Larvae chew their way into the cambial area.

Pheromone traps are available to monitor the time of adult emergence. Entomopathogenic nematodes may be of limited use given that the larvae of this clear-winged borer do not entirely keep their tunnels clear of sawdust and frass. Applied sprays of these must be directed to the base of the major shoots and trunks to maximize effectiveness. Oftentimes, heavy infestations are not realized until severe symptoms are evident.