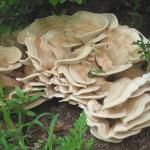 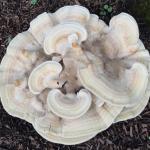 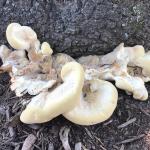 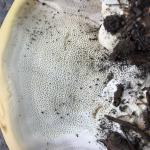 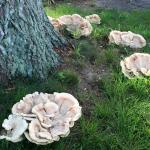 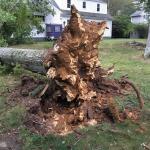 Primarily oaks (Quercus spp.) but occasionally other deciduous hardwoods. Older literature describes B. berkeleyi from conifers as well, but the fungus is restricted to hardwoods.

Bondarzewia is a common and destructive pathogen of oaks in southern New England, occurring on forest and landscape trees. It also frequently occurs as a saprophyte on dead trees in forests or stumps left remaining in managed areas. The fungus causes a white stringy rot of the heartwood in the roots and lower trunk, but typically does not extend upwards in the lower trunk beyond 3–5 feet. Its growth rate is considered fast when compared to other wood-rotting fungi common on oak. Because the decay is mostly restricted to the heartwood, excessive tapering at the base may be the only external symptom present. However, other symptoms may include cracks, seams and sap flow on the lower trunk. Due to its relatively fast growth rate and ability to degrade lignin as a white rot pathogen, serious reductions in structural stability can result from advanced infections. The fungus produces annual mushrooms consisting of one to five overlapping, cream-colored caps produced on a short central stem. The pore layer is white and typically does not bruise when pressed. At times, the fruiting bodies can be several feet in width, making them highly conspicuous when they appear. However, in exposed sites with dry and compacted soils, the mushrooms may be distorted and difficult to properly recognize. The mushrooms typically grow from infected roots a few feet away from the main trunk, but can also grow directly from the main trunk at the soil line. The mushrooms can appear anytime from July onward but tend to be most abundant in August. The majority of spores are dispersed locally and the risk of overland spread to other nearby oaks is likely low.

While studies focused on Bondarzewia are limited, the fungus is known to primarily occupy the base of the trunk (known as the butt log) and is not known as an extensive root decayer. However, when advanced infections develop, significant portions of the primary roots can be decayed. Once infected trees are identified, a thorough risk assessment performed by a certified arborist should be completed. Nothing can be done to eradicate the pathogen and fungicides are of little, if any, value. Maintaining high tree vigor and avoiding needless basal wounding can help to avoid establishment and development of the disease.