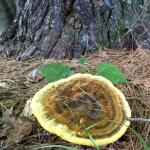 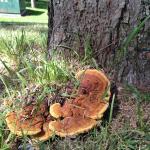 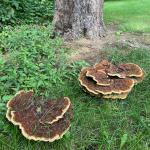 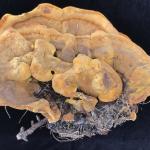 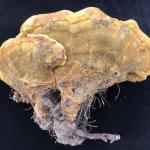 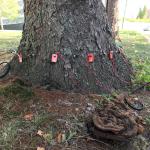 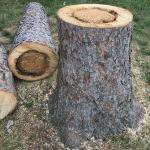 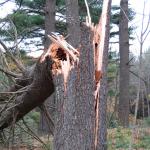 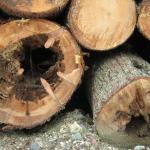 The fungal pathogen Phaeolus schweintizii (known as the velvet-top fungus) is responsible for brown cubical root and butt rot.

Eastern white pine (Pinus strobus) is the primary host in southern New England, but the disease is also common on hard pines and spruce (Picea). Numerous other conifers in both landscape and forest settings are also susceptible, including: hemlock (Tsuga), true fir (Abies), larch (Larix) and Douglas-fir (Pseudotsuga).

Like many root and butt rot diseases, symptoms of infection can range from very general to non-existent. Overall, root and butt rot diseases symptoms of conifers can manifest as: canopy dieback/thinning, premature needle shedding, excessive basal tapering, resinosis from the lower trunk and a stress cone crop. Typically, brown cubical root and butt rot goes undetected until trees are large and suffer from stem breakage or uprooting. As the name implies, P. schweinitzii causes a brown rot, meaning the cellulose and hemicellulose are preferentially targeted while the lignin remains in a modified form. The decaying wood appears brown and separates into cubical sections. At advanced stages, the wood becomes very dry and powdery. Brown rot results in severe reductions in wood bending strength, making trees susceptible to stem breakage and uprooting under loading from strong winds. Decay columns can advance to exceptional heights within the main trunk. Annual fruiting bodies develop at the base of infected trees or from lateral roots nearby. They can appear from mid-August through September in southern New England. The mushrooms develop a short and thick stalk and the upper surface of the cap is yellow-brown and velvety to the touch when young. The underside is a similar color and has angular-shaped pores. After a short period of time, especially when exposed to near freezing temperatures, the mushrooms become dark reddish-brown and can blend into nearby surroundings. Once advanced decay has developed, fruiting bodies will in many cases develop at the base of infected trees each year. Spore dispersal is believed to be the primary means of overland spread. Once established in the soil, the fungus penetrates fine roots or may potentially invade roots infected by other fungi (e.g. Armillaria). Root to root contacts are not believed to be a primary means of disease spread in forest and landscape settings.

Active management for trees with root and butt rot infections is very difficult. Avoid planting conifers like eastern white pine in shallow and poorly-drained soils as these site conditions can predispose trees to infection. If fruiting bodies are appearing annually from or near the base of landscape conifers, these trees should be closely monitored in the future. Canopy symptoms often do not develop. Decay usually initiates in the heartwood and expands slowly over time. It’s uncommon for the decay to be offset from the center of the trunk. Therefore, even with significant decay, infected trees may be structurally stable. However, a thorough risk assessment should be performed for conifers suspected, or known, to harbor root and butt rot from P. schweinitzii.