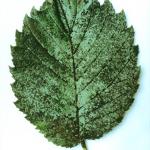 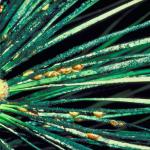 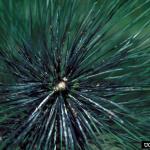 Sooty mold is a dark colored fungus that grows on honeydew excreted by piercing sucking insects or on substances exuded from leaves of certain plants.  Common genera of sooty mold fungi found are Aethaloderma, Capnodium, Cladosporium, Euantennaria, Scorias, and Trichomerium.

Sooty mold fungi are decomposers that break down honeydew or naturally exuded plant materials as their source of nutrition.  They do not directly draw any sustenance from the host plant on which they reside.  However, sooty mold that covers leaves blocks light and makes photosynthesis less efficient.  Honeydew excreted by piercing sucking insects such as mealybugs, leafhoppers, scales and aphids serves as the growth medium for sooty mold fungi.  Insect honeydew contains sugars, amino acids, proteins, minerals, and vitamins.  Sooty mold is most frequently seen on northern catalpa (Catalpa), elm (Ulmus), linden (Tilia), maple (Acer), and pine (Pinus) generally because these insects frequently feed on these trees.  In addition, sooty mold can grow on exudates produced by glandular trichomes on leaves of some plants such as Catalpa, Hibiscus, and black walnut (Juglans).

Sooty mold covers tree limbs and leaves with a thin black material.  The dark color of sooty mold growth is due to the presence of dark-colored pigments in the mycelial "threads" that make up the main parts of sooty mold colonies.

Many sooty mold fungi are sticky and that helps them adhere to the surfaces on which they grow and absorb the moisture they need.  The black crusty growth can cause yellowing of foliage when the sunlight is obstructed.

Sooty mold growth is of two types.  The first grows on leaves, which lasts for the life of the leaf.  The second persists on stems and twigs of woody plants and this type is renewed from existing parts of the fungus produced the previous season.  During the growing season, the fungi produce spores that are blown and splashed to honeydew or plant exudate coated surfaces.  When conditions are wet, the spores germinate and sooty mold grows on the medium available.  Warm temperatures and dry weather increase the prevalence of sooty molds.  During dry periods, aphid populations and their honeydew production typically increase on foliage undergoing moisture stress.  In addition, under dry conditions, less rain is available to remove or dilute honeydew concentrations suitable for sooty mold growth on leaves and other surfaces.

Sooty mold is unsightly but it does virtually no harm to the plant.  Consider the presence of sooty mold an indication of insect activity that may cause damage.  Manage sooty mold by reducing populations of sucking insects (aphids, mealybugs, leafhoppers, and soft scales) that excrete honeydew.