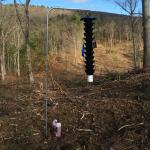 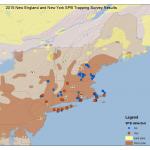 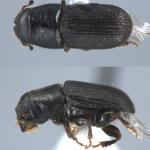 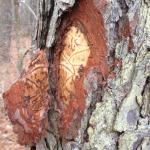 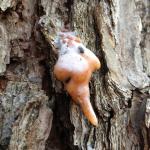 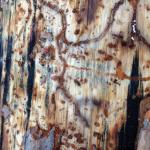 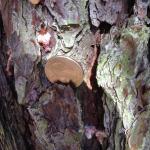 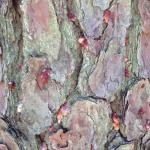 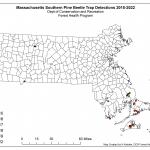 In the southern United States, southern pine beetle (SPB) prefers loblolly (Pinus taeda), shortleaf (P. echinata), pond (P. serotina), and Virginia (P. virginiana) pine. It has also been recorded infesting spruce pine (P. glabra) and sand pine (P. clausa). As a result of its range expanding into the Northeast in recent years, it has been observed attacking eastern white pine (Pinus strobus) and pitch pine (Pinus rigida). It has also been observed infesting Norway spruce (Picea abies) in NY and NJ. In Massachusetts, the health of our pitch pine species throughout the state is of greatest concern when considering this insect. In 2015, southern pine beetle was detected in traps deployed by the Massachusetts Department of Conservation and Recreation (DCR) and Massachusetts Division of Fisheries and Wildlife (DFW) from the town of Southwick to Cape Cod and Martha’s Vineyard. This monitoring was completed with support from the US Forest Service. Although DCR and Mass F&W caught SPB in 18 out of 30 traps placed in 2015, no one has observed trees to be infested or any associated tree mortality yet in Massachusetts. SPB has also been trapped in NY, CT, and RI. Infestations in New York have been significant and have led to tree mortality.

Like all beetles, southern pine beetle undergoes complete metamorphosis (is holometabolous) with four life stages: egg, larva, pupa, and adult. Adults are dark red/brown to black in color and 1/16 – 1/8” in length. Eggs are white and larvae are crescent-shaped with a dark red/brown head and a white body. Four larval instars can be observed, with pupa being bright white. The adult is light brown in color prior to drying and hardening and becoming black. Female beetles will select suitable host trees and release chemical pheromones to attract male mates. She will penetrate the bark and begin creating a gallery where she is joined by the male and mates. Early attacks to the tree may be “pitched out” by the resin defenses of the tree. The pheromones produced by the females and the volatile chemicals expressed by the stressed host plant will attract additional males and females. If tree defenses can be overcome, females will colonize beneath the bark, creating S-shaped galleries. The inoculation of the tree with a blue stain fungus from these beetles in combination with their feeding can also lead to tree mortality. Females may lay up to 160 eggs in their lifetime and development can take as little as 26 days in warmer climates. In the south, 3-9 generations of SPB have been observed to occur per year. In NY, 3-4 generations have been observed on Long Island. Massachusetts temperatures should keep the number of generations per year to the lower end of this range.

Southern pine beetle can be detected most easily by the presence of popcorn-sized pitch tubes on the outer bark of trunks and branches. Pitch tubes can range in color from white to red. They can occur from the ground level to high in the canopy of the tree. Exit holes (about 1/16” in diameter) can be observed in the bark from emerging adults. Brown-orange frass (excrement) that looks like wood shavings may be found in crevices and branch joints. S-shaped galleries can also be observed by peeling back any bark that may be falling off the tree. By the time foliage fades from green to yellow to brown, the infestation may be advanced in age. The presence of certain checkered or clerid beetles can also indicate high populations of southern pine beetle, as these checkered beetles prey upon SPB.

At this time, in Massachusetts, it is not known whether or not management for southern pine beetle is warranted. Like in all Integrated Pest Management programs, landscape professionals should monitor species like pitch pine and eastern white pine for the presence of wood boring beetles. Although these insects have been detected in traps in Massachusetts, their numbers were quite low in 2015. Officials have not yet detected SPB in host trees in MA with no tree mortality yet observed. If attacks on trees are observed, there are chemical management options available. Because this is a wood boring insect, management can be difficult as all life stages are nearly always protected unless the applicator is using systemic or more residual insecticides. Products containing permethrin or bifenthrin will kill adults as they try to enter the tree, however should be reserved only for limited use on specimen trees; they should be used according to label instructions and drift should be avoided. Great care must be taken near aquatic environments as these chemicals are very toxic to fish and aquatic invertebrates. It is also worth noting that broad-spectrum, residual insecticides may have unintended effects on non-target and beneficial organisms. Other products with the active ingredient emamectin benzoate have shown effectiveness in managing these insects for 2-3 years. However, they are restricted use due to the toxicity to humans, require the applicator to be licensed, and require specialized equipment when injected in to the tree. In a forested setting, use of these chemicals can be impractical. Southern pine beetle has been a pest in the southern United States largely since 1882 and has been a focus of research since. Past experience has shown silvicultural practices such as thinning un-infested stands and removing infested trees in the early winter to reduce overwintering brood may be successful in lowering SPB populations.