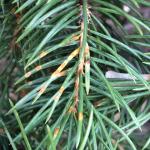 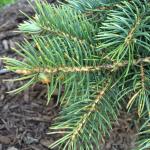 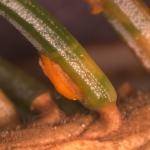 In late winter to early spring, orange to yellow spots or bands appear on one-year-old needles. In late winter, the symptoms may be hard to detect, but when spring advances and bud break approaches in early to mid-May, the bands swell to produce waxy, yellow-orange pustules containing masses of rust-colored spores. At bud break, the pustules erupt and the spores are dispersed by wind and rain to newly emerging needles on nearby shoots. Wet weather will prolong the spore production period. Newly infected needles do not show symptoms until the following winter or spring. After the pathogen sporulates on one-year-old, they may become rusty brown and drop during the summer. As with most needle diseases, spruce needle rust tends to affect the lower branches more severely but, because C. weirii spores are wind dispersed, the upper foliage may also be infected over time. Severely infected trees can have a orange-colored appearance from the lesions and repeated defoliation can retard growth and reduced aesthetic appearance. However, in many cases the disease is not particularly desctructive to otherwise healthy trees but does reduce their aesthetic value. Spruce needle rust is differs from other common landscape rust diseases (e.g. cedar-apple rust) in that the pathogen is autoecious; it occurs only on spruce and has no known alternate host.

When the disease is severe, infected shoots can be pruned to slow or potentially stop the spread of the disease to newly developoing needles. Pruning of diseased shoots should take place in late spring when the needle lesions are visible but have not yet ruptured to release spores. Removal of severely infected trees will reduce spread of wind-blown spores to nearby healthy trees but this action is rarely required in most landscape settings. Disease severity tends to be higher when spruce are growing in tight hedgerows or in deep shade. Fungicides may be practical to protect new growth and stop spread of the disease on small, high-value specimen trees. Copper hydroxide or mancozeb can be effective and is labeled for use on spruce in the landscape. The first application should be made just before bud break and subsequent applications made on labeled intervals until needles mature. Trees infected with spruce needle rust, especially blue spruce, are often harboring additional needle and stem diseases (e.g. Rhizosphaera and Stigmina needle cast) in addition to insect and mite problems.