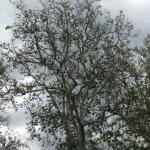 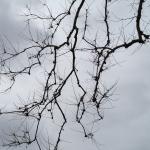 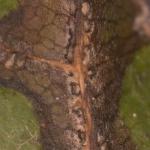 The fungal pathogen Apiognomonia veneta is responsible for sycamore anthracnose.

The most common symptom of sycamore anthracnose is the slow development or inability of American sycamore to leaf out in the spring. Typically, this is associated with wet spring weather, which facilitates spore dispersal and infection of newly developing shoots and leaves. Even minor rain events (e.g. <0.3″) can be enough to promote disease development. Despite regular infection and, during certain years, high disease severity, trees are usually able to flush new growth once conditions become warmer and drier. Visible symptoms include angular leaf spots and blotches on the foliage (especially along the midrib), shoot and bud blight, and splitting stem cankers on twigs and small branches. In fact, the characteristic right-angle branching pattern typical of American sycamore is the result of repeated anthracnose infections. The terminal bud is killed allowing the lateral buds to flush, creating the irregular branching pattern.

There are three distinct but often overlapping stages of sycamore anthracnose: (i) dormant twig/branch cankering and bud blight; (ii) shoot blight; and (iii) foliar blight. The fungus is active in twigs and branches during mild weather when the tree is dormant in autumn, winter and early spring. Active fungal growth within one-year-old twigs kills the tips, leading to bud blight. In addition, the fungus often grows into older branches below the dead twigs, creating perennial cankers. During wet spring weather, fruiting structures mature in discarded leaves from the previous season and in the bark of blighted twigs and cankered branches to disperse spores via wind and rain splash. These spores infect emerging shoots and developing leaves, which rapidly wilt and die. Because of the pathogen’s ability to overwinter in twig and branch cankers, it can readily produce spores that easily infect newly developing tissues nearby in the canopy.

Practices that increase air flow and sunlight penetration, such as thinning, can help to inhibit the pathogen by accelerating the drying of foliage after rain. Remove fallen leaves and prune infected twigs and branches, if possible, to reduce inoculum in the canopy. For large and mature trees, pruning of blighted twigs and cankered branches is not practical because the pathogen is so abundant in the canopy. Planting of resistant cultivars of London and Oriental planetree is recommended on sites where sycamore anthracnose is a problem. Even when disease severity is high during years with particularly wet spring weather, sycamores are typically able to produce a robust set of foliage by late summer. Therefore, chemical control is only warranted in select cases. For young trees suffering from transplant shock, repeated insect defoliation or other insect/disease/site related stresses, fungicide application may be justified. Preventative applications should be applied at bud break and on labeled intervals until foliage is fully expanded or dry weather prevails. Injections of systemic fungicides can also be performed for more thorough distribution in the canopy, especially when twig and branch cankers are abundant. The following chemicals are labeled for use in landscape settings: copper hydroxide, copper hydroxide + mancozeb, copper salts of fatty and/or rosin acids, copper sulfate, debacarb + carbendazim, mancozeb, propiconazole and thiabendazole hypophosphite.