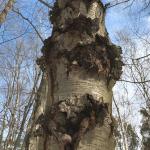 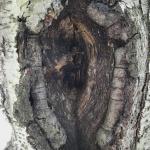 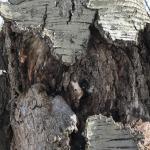 Neonectria distissima typically colonizes susceptible trees through old branch stubs. Perennial cankers then develop on the main trunk and slowly develop over many years, sometimes with seemingly little effect on the overall health of the tree. Neonectria expands cankers when the host is dormant in spring and fall. When the host is active during the growing season, it produces corky rolls of callus and bark in an attempt to close the wound. After many years of this back and forth response by host and pathogen, the cankers take on a target-like appearance. Target cankers rarely girdle stems more than a few inches in diameter. Like most cankering fungi, Neonectria does not degrade wood, instead it consumes sugars in the phloem. However, the cankers become points of entry for wood-decaying fungi, such as the sterile conk rot fungus (Inonotus obliquus) on birch. Trees with many trunk cankers can also suffer failure when exposed to strong winds or heavy snow loading.

While N. ditissima often colonizes old branch stubs, infections can also occurs at leaf scars, cracks in branch axils, sunscald lesions, and other wounds to the bark that expose the cambium. One year old cankers are small, discolored areas that are flattened relative to adjacent bark, and only visible on thin-barked branches and stems. Most spores produced by the fungus are wind- and rain-dispersed during the spring and fall from established cankers. Small masses or individual red to orange fruiting structures can appear from autumn to spring on the margins of expanding cankers. However, in most cases, the fruiting structures are never observed.

Once N. ditissima establishes itself in a host, management should focus on sustaining the vitality of the tree. Remove and discard cankered branches during the winter when the fungus is dormant. Irrigate when conditions are dry to avoid the development of drought stress, fertilize if soils are deficient in minerals, prune to preserve sound branch structure, avoid wounding the bark and maintain a layer of mulch over as much of the root zone as possible. Infected trees can maintain a healthy canopy for many years. However, carefully scout the canker sites on a regular basis for symptoms of decay and for signs of wood-decaying pathogens that have colonized the wounds. These can weaken the structural stability of the tree, making it susceptible to stem failure.