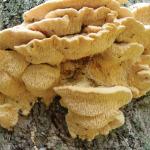 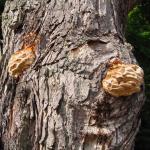 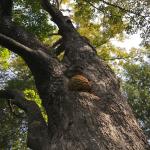 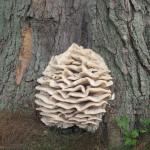 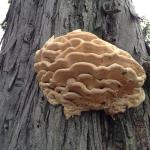 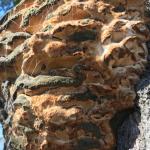 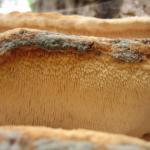 Climacodon septentrionalis is known as the northern tooth fungus

Maple (Acer), especially sugar maple (A. saccharum), and beech (Fagus) are the most common hosts in the region. Less frequently, Climacodon can occur on birch (Betula), hickory (Carya), oak (Quercus), apple (Malus) and elm (Ulmus) in the landscape.

Climacodon causes a spongy, white trunk rot of deciduous hardwoods in forest and landscape settings. The fungus primarily invades trunk wounds or frost cracks but can also colonize branch stubs. Symptoms of infection on sugar maple may include bulges and swollen sections of the lower trunk, especially at co-dominant leader unions. More often, no observable symptoms are present and the only indication of the disease are the large, annual fruiting bodies produced by Climacodon. These mushrooms consist of many, shelf-like layers that are cream-colored to pale yellow when fresh, becoming discolored (greenish-brown to black) with age. They can persist on trees for many weeks in late summer and early autumn but do not survive into the following year. The underside consists of small spines or teeth, which bear the fungal spores, hence the common name northern tooth fungus. When fruiting bodies are visible, a significant decay column will have developed above and below. Spores are dispersed on local air currents to infect nearby trees.

When the fungus is confirmed on an infected tree, a thorough risk assessment should be performed by a certified arborist. At the same time, infected trees may remain structurally stable for several years. The incidence of Climacodon is not grounds for immediate removal, as many infected trees persist in the landscape. Avoid wounding the trunk of susceptible hosts, especially sugar maple, to reduce possible points of entry for the fungus. Nothing can be done to eradicate the fungus once it is established and fungicides will have no effect.