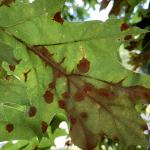 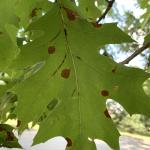 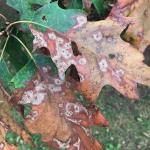 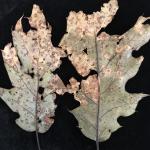 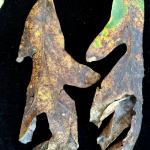 Tubakia leaf blotch is primarily attributed to the actions of Tubakia dryina. However, research has shown that at least five species of Tubakia are present in the U.S., suggesting that the disease is caused by a complex of Tubakia species, some of which remain undescribed.

Tubakia leaf blotch is often a mid- to late-summer disease, with symptoms appearing from July onward across southern New England. Symptoms first appear as water-soaked, circular lesions that dry out and darken over time to reddish-brown or dark brown. These large leaf spots can coalesce to create necrotic patches that consume a large percentage of the leaf surface. It is not known whether a secondary infection cycle exists after the initial infection, but new lesions can develop well into August. In addition to sporulating from both the upper and lower surface of the leaf, Tubakia has the ability to sporulate from the petioles as well. Because many oak species exhibit marcescence (incomplete leaf abscission in autumn) they can retain dead leaves in the canopy throughout the winter months. This allows the fungus to overwinter in the canopy, or nearby as the foliage is finally shed, providing the primary inoculum for infection of new tissues the following spring. Tubakia species are known endophytes and it has been shown that Tubakia can infect newly developing shoots in the spring, producing a latent infection (no symptoms or signs of disease). The fungus then spreads into the petioles and leaves, causing a leaf blotch and foliar blight several weeks to months later. Therefore, while symptoms often develop late in the growing season, the primary infection takes place early in the spring season as new tissues are developing. Moderate to severe defoliation can occur when numerous lesions form on infected leaves. However, because symptoms usually develop later in the growing season, when growth is mostly complete for the season, only minor growth losses are attributed to the disease in most landscape settings.

Remove and discard fallen leaves to reduce inoculum at the site. Even if leaves (with petioles) are shed prior to new tissue development in the spring, they may be nearby, having avoided the autumn clean-up that removed downed foliage from most deciduous hardwoods. Therefore, a spring clean-up may be warranted where the disease is present. Chemical management is often unnecessary, but several fungicides are labeled for use against Tubakia and include: copper hydroxide, copper sulfate, mancozeb, myclobutanil, propiconazole, triadimefon+trifloxystrobin, trifloxystrobin and thiophanate-methyl. Despite the fact that symptoms do not develop until later in the growing season, infections are believed to initiate in the spring. Therefore, chemical application should take place as soon as new shoot development begins and on regular intervals, should wet conditions that are conducive to spore production persist.