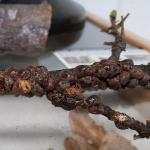 Tuliptree scale is a soft-bodied scale insect pest of tuliptrees, and other trees in the Magnoliaceae family. By feeding on the tree’s vascular system the tuliptree scale depletes tree resources and produces copious amounts of honeydew. Damage caused can include reduced growth and vigor, branch dieback, and even tree death. Young trees are worst affected. Sooty mold will also grow on surfaces coated in honeydew. There are several options for managing tuliptree scales. The tuliptree scale is one of the largest soft scale insects in the United States and may be found wherever host plants occur.

The tuliptree scale has one generation per year in New England, but may have several in warmer locations. They overwinter as second instar nymphs (immatures) on their host plant’s branches. As the temperature warms in the spring, they break dormancy and actively feed on the host's phloem using piercing-sucking mouthparts. After a few weeks, they mature into adults. Mature female tuliptree scales are 6-12 mm in diameter and hemispherical in shape with a distinctive flange around the edge. They range in color from gray-green to orange-pink with mottled black markings, and are enveloped in a self-produced waxy cover. Adult males emerge in early summer (June) as tiny, winged insects. They mate with the females in late August through September, and then die. During the summer, females continue to mature, feeding on the host and producing large amounts of honeydew (sugary liquid excrement). As eggs develop inside the female, she swells and loses her crimped edge. In late summer, the female gives birth to as many as 3000 live crawlers, the only mobile stage of the female tuliptree scale. After this, the adult female dies and turns brown, but may remain stuck to the host plant. Within three days, a crawler must find a suitable feeding site on the host plant, either by crawling or being shifted to a new host via birds or wind. Once a location is found, the crawler inserts its piercing-sucking mouthpart. Crawlers are dark red and about 0.5 mm long. 2-3 weeks after crawlers emerge, they molt into a 2nd nymphal instar and prepare to overwinter.

Tuliptree scale is a nuisance in two ways: by removing host plant sap and by producing honeydew.

The first sign of a tuliptree scale infestation is often the obvious presence of sooty mold. Look for black-stained leaves throughout the summer. Another obvious sign is branches that have a warty or bumpy appearance in late summer. These are the mature female scales. Once found, tuliptree scale may be managed in order to protect tree health.

In the winter, when branches are easier to see, scout for small, black overwintering second instar nymphs (immatures).

The tuliptree scale is often misidentified as the larger magnolia scale (Neolecanium cornuparvum). To avoid this, check for these key differences:

For more information on differentiating between magnolia and tuliptree scale, see "Differentiating Magnolia Scale from Tuliptree Scale" in the Resource section below.

A light infestation of tuliptree scale can be removed by hand. If localized, pruning off affected branches can reduce the tuliptree scale population. Destroy removed infested plant material.

Several natural predators and parasitoids of tuliptree scale exist, including the larva of the pyralid moth, Laetilia coccidivora, ladybird beetles, Hyperaspis proba, Hyperaspis signata, Chilocorus stigma, and Adalia bipunctata, and the parasitoid wasps, Anicetus toumeyella, Metaphycus flavus, Coccophagus flavifrons, and Coccophagus lycimnia. However, these are typically not sufficient to reduce an outbreak population of this scale, especially if ants feeding off the honeydew are protecting the tuliptree scale from predation. In some cases, management of the ants may be necessary in addition to the tuliptree scale itself.

Different chemical management options are available for tuliptree scale at different times of the year.

In early spring, before new growth occurs, overwintering second instar nymphs may be managed with dormant (horticultural) oils applied thoroughly over infested branches when temperatures and weather conditions allow according to label instructions.

Crawlers are the most vulnerable life stage of the tuliptree scale because they haven’t yet developed a waxy cover. Check for the presence of crawlers starting in mid-August. If present, contact insecticides may be applied in these areas at this time. Repeat applications may be needed to cover the entire period of crawler emergence, if allowable on the product label. If beneficial insects (natural enemies) are present in the scale population, summer rate horticultural oils or insecticidal soaps may be used to conserve these non-target organisms while managing the scale. If ants are tending the tuliptree scales, contact insecticides with residual properties may be needed to manage larger tuliptree scale populations (Davidson and Raupp, 2014).

Systemic insecticides may be applied through the soil or the bark of the host plant after bloom to manage the tuliptree scale while reducing risk to pollinator populations.

Additional active ingredients labelled for use against the tuliptree scale include but are not limited to: abamectin, acephate, acetamiprid*, carbaryl, clothianidin*, cyfluthrin, dinotefuran*, gamma-cyhalothrin, imidacloprid*, lambda-cyhalothrin, neem oil, and pyrethrins.

Always read the entire label of any pesticide product before use. Ensure that you are using it in a manner consistent with the labeling. The label is the law. No product should be used in a manner that is contrary to its label. Read and follow all label instructions for safety and proper use. Make sure that the product you select is labelled for use against the pest you wish to manage, on the site to which it will be applied. *Neonicotinoid insecticides cannot be applied to trees or shrubs in Massachusetts except by an individual with the proper licensure or certification from the MA Department of Agricultural Resources.