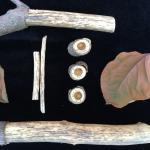 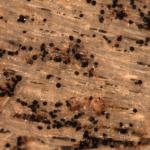 Verticillium wilt is caused by two species, Verticillium dahliae and V. albo-atrum. However, V. dahliae is responsible for the majority of infections on woody ornamentals in southern New England.

Infections from Verticillium originate in the soil, when the fungus invades the root system of susceptible plants. Once the fungus becomes established in the vascular system, it is transported throughout the canopy. Verticillium also grows through ray cells to penetrate deep into the secondary xylem. Symptoms can appear rapidly after infection and the most commonly observed symptoms of Verticillium wilt include marginal leaf scorch, leaf wilting, vascular staining and branch dieback. Because there is a disruption of water and mineral transport to the affected branches and leaves, the symptoms appear similar to those caused by root disease, abiotic root damage (e.g. severing, crushing or compaction), drought stress and stem/branch cankering. Acute foliar symptoms can range from wilting, drying, marginal/interveinal browning and premature shedding on a single branch or one side of the tree’s canopy. These symptoms can appear at any time during the growing season. In addition, there are chronic symptoms that resemble a tree in decline, such as: stunted growth, marginal leaf scorch, undersized and sparse foliage, heavy seed production and branch dieback. The vascular staining that results from the disease is the best diagnostic symptom that can be used to determine if additional testing to confirm the pathogen is necessary. However, keep in mind that staining is not always present on infected trees and shrubs. Vascular staining is often olive-green in color but may range from yellow to brown, depending on the host. Because of the pathogen’s ability to move through ray cells, staining may be present deep in the xylem tissue and not in the outer vascular tissue just under the bark (where vascular staining caused by Dutch elm disease is often observed).

One of the most interesting features of Verticillium is its ability to produce microsclerotia. These are very small, black-colored resting structures that resemble a small seed. Once Verticillium has caused disease, microsclerotia are produced within a variety of dead plant parts, including roots, stems and leaves. They allow the pathogen to overwinter in dead plant tissues and when produced in the soil, allow the fungus to persist for many years at the site. When infected leaves and stems fall to the ground, the fungus can also grow into the soil to overwinter. Contact between neighboring, healthy roots and dead, diseased roots can allow Verticillium to spread locally. Overland spread can occur when infected leaves are dispersed away from an infected tree by wind. In addition, Verticillium can infect several resistant weedy plants and create new microsclerotia without ever causing any above-ground symptoms. Therefore, once the fungus is established at a site it can remain there indefinitely.

Verticillium is widespread in forest and landscape settings, yet disease incidence remains relatively low in most cases, signifying that many plants are able to resist the pathogen when attacked. The impact of Verticillium wilt depends on the inherent susceptibility of the tree/shrub, environmental stress (especially drought and root damage) and the virulence of the pathogen. Maintaining high tree vigor is essential, since the tree’s natural defense response may be able to compartmentalize the infection. For recently transplanted trees and shrubs, provide regular irrigation during extended dry periods, fertilize as needed and maintain an adequate mulch layer over as much of the root zone as possible. These activities do not have direct impacts on the pathogen itself, but they serve to enhance the tree's ability to resist infections. Reduce inoculum and improve the appearance of infected trees and shrubs by removing dead shoots and branches. Keep in mind, however, that pruning does not eliminate Verticillium from the plant since infections first establish from the roots. Because of the soilborne nature of the fungus and its establishment within the roots, fungicides often have little to no effect. Use of resistant or immune trees and shrubs as replacement for those infected with Verticillium wilt is often the only viable strategy in landscape settings. A selected list of resistant trees and shrubs include: apple/crabapple (Malus), beech (Fagus), birch (Betula), boxwood (Buxus), dogwood (Cornus), hackberry (Celtis), hawthorn (Crataegus), hickory (Carya), holly (Ilex), honeylocust (Gleditsia triacanthos), katsura (Cercidiphyllum), linden (Tilia), mountain-ash (Sorbus), oak (Quercus), pear (Pyrus), aspen/poplar (Populus), sycamore/planetree (Platanus), sweetgum (Liquidambar) and walnut (Juglans). All conifers are also resistant or immune to Verticillium wilt. Resistance does not imply immunity; therefore some of the plants listed here may be susceptible to infection.