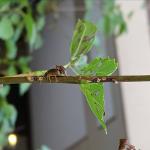 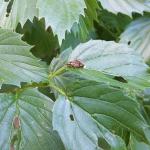 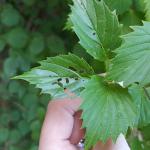 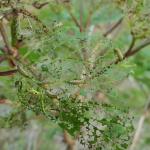 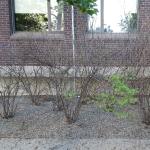 The viburnum leaf beetle (Pyrrhalta viburni; VLB) is an invasive species that feeds exclusively on various plants in the genus Viburnum. Originally from Europe and Asia, VLB was first identified in North America in 1947 in Ontario, Canada, and officially identified in Massachusetts in 2004. Its current range includes eastern Canada and much of the eastern U.S., including Connecticut, Maine, New Hampshire, New York, Ohio, Pennsylvania, and Vermont. It has also been detected in Washington. Spread southward may be limited by mild winters - overwintering eggs require a prolonged chilling period.

There is one generation of viburnum leaf beetles per year. VLB overwinters as eggs laid inside pits on viburnum stems. Eggs are tiny and female beetles may lay up to 500 eggs per female, per season. Egg pits are often covered with “caps” made of excrement and chewed bark fragments, so eggs are unlikely to be seen. Warming temperatures trigger egg hatch in late April/early May, the time when young larvae first emerge. Larvae are initially dark-colored, but lighten to greenish-yellow with dark brown spots as they mature; they have cylindrical bodies that can reach up to 7-11 mm long (⅓ inch). They go through three instars (molts) as larvae, shedding their cuticle in between each stage. First instar larvae are tiny, only approximately 1 mm. long. Larvae feed in groups on the underside of viburnum leaves, first skeletonizing them, but moving to the tops of the leaves to feed as they get older/larger, until only midribs and major veins are left. 8-10 weeks after hatching, larvae crawl down the stem of their host plant to the soil, where they pupate in a cocoon. Pupae require moist soil to survive, however if it is too wet or too dry, survival of the pupal stage is lower. Adults emerge 8-10 days later, in mid-July.

Adult viburnum leaf beetles are smaller than their mature larvae, only 4.5-6.5 mm long. The females tend to be larger than the males. Golden-brownish in color, VLB may have a metallic golden sheen when viewed in direct sunlight due to the presence of short golden-gray hairs on the body. Adults also feed on the leaves of viburnum plants. Adult feeding damage to the leaves looks different from that of the immature larvae. Adults chew elongated, oval-shaped holes in host plant leaves. Adults mate and lay eggs from July until the first killing frost in the fall. Females chew several small recesses toward the end of stems, most frequently on that season’s growth. They then lay about 8 eggs in each recess and cover the hole with a cap made of excrement, chewed bark fragments, and saliva. These caps are observed in neat rows near the tips of branches.

Viburnum leaf beetle larvae and adults both feed on viburnum leaves. Larvae can skeletonize young leaves by June. Larvae are capable of eating the entire leaf except for the midrib and major veins. Plants may attempt to leaf out again while VLB pupate in the soil, but adult beetles emerge and begin feeding again, leaving large, irregular holes. (Adults chew elongated, oval-shaped holes in host plant leaves.) Severe infestations can cause complete defoliation. 2-3 years of complete defoliation weakens the plant to the point where it may be killed.

Egg laying can also damage the host plant, as VLB females chew holes in the stem, creating vulnerable points where the plant loses structural integrity and moisture. Young stems with multiple VLB egg pits may not survive the following winter. However, defoliation is the primary concern.

Look for rows of viburnum leaf beetle egg sites on the tips of twigs and branches. Be sure to check both previously infested hosts and unaffected hosts as VLB adults may move from plant to plant. If there were high levels of VLB the previous season, make it a priority to identify spots where eggs were laid so they can be removed or otherwise managed.

Check the underside of viburnum leaves in early May for larvae, which will typically feed in groups. The presence of several larvae on the majority of host plant leaves may mean chemical management is necessary to consider. It is easiest to manage viburnum leaf beetle larvae when they are still small and vulnerable. They are less susceptible as they mature, particularly to certain reduced risk insecticide options, and adults can fly away or drop from the plant when pesticides are applied, making them difficult to manage.

If possible, plant resistant varieties of viburnum (see list above). It may be necessary to remove and replace susceptible plants that are infested year after year.

Look for egg sites and prune them out during late winter/early spring, before they hatch. Destroy infested branches by burning them or burying them. This will reduce populations for the following season. This may be the single most effective measure you can take to limit viburnum leaf beetle populations. However, it may be impractical in large plantings.

Encourage predatory insects. While there is no predator specific to viburnum leaf beetle, many generalist predators feed on them. Lady beetle adults and larvae, lacewing larvae and spined soldier bug nymphs eat VLB larvae, while lady beetle adults and spined soldier bug adults eat VLB adults. Encourage these species by avoiding broad-spectrum insecticides when possible and planting a diverse array of plant species near viburnums. For example, certain species of natural enemies may be present in higher numbers in landscapes with species diverse and structurally diverse plantings. (Ex. planting many different plant species that grow to different heights and sizes.)

Horticultural oils sprayed onto the plant while leafless and dormant may kill viburnum leaf beetle eggs. A high rate of oil (4%) was found to be the most effective. Such high amounts can burn plant leaf tissue, so the oils must be applied prior to leaf emergence. Research has shown that 75-80% of eggs may be killed.

Horticultural oils (at a rate of 2-3%) and insecticidal soaps can provide some management of VLB larvae, especially if the larvae are in the 1st instar.

Several contact insecticides are labeled for use on VLB larvae, including organic options derived from the fungus Saccharopolyspora (spinosad) and pyrethrins found naturally in some chrysanthemum flowers. These are most effective on younger larvae, so early detection is key.

Additional active ingredients labelled for use against viburnum leaf beetles include but are not limited to: acephate, acetamiprid*, Beauveria bassiana, carbaryl, dinotefuran*, and imidacloprid*. Some of these active ingredients are toxic to pollinators and should not be used on flowering plants when in bloom.

When using any pesticide, always remember that the label is the law. Do not use any pesticide in a manner that is inconsistent with its labeling. Read and follow all label instructions for safety and proper use. Make sure that the product you select is labelled for use against the pest you wish to manage, on the site to which it will be applied. *Neonicotinoid insecticides cannot be applied to trees or shrubs in Massachusetts except by an individual with the proper licensure or certification from the MA Department of Agricultural Resources.