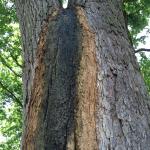 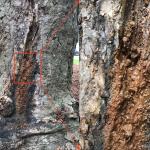 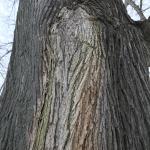 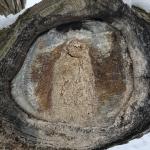 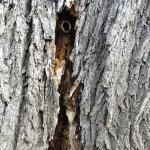 Wetwood is a condition in which the heartwood becomes water-soaked due to bacterial colonization. Wetwood often supports large populations of anaerobic bacteria from multiple genera, none of which are known to possess any host specificity. Wood harboring these bacteria has a strong, pungent odor and can range in color from pinkish, yellow, olive-green, to dark brown.

Wetwood bacteria are not tree pathogens. There are, however, cases where wetwood-induced bacterial growth appears to harm trees. Yet, for the majority of affected trees the presence of wetwood is inconsequential to their overall health. There is also evidence that wetwood bacteria may provide some level of protection against wood-rotting fungi. The lack of available oxygen in the saturated wood may prevent wood-rotting pathogens, like Armillaria for example, from establishing in the heartwood. Several studies, using conifers and hardwoods, have shown that wood tissues colonized by wetwood bacteria exhibit higher decay resistance compared to uncolonized wood. Wetwood bacteria are both free living and common in soil and water. They must invade trees to establish but there is no evidence that this process causes necrosis to any live tissues in the roots, main trunk or branches. Wounds are the most common source of entry for wetwood bacteria. Wetwood often develops in the roots or in the lower trunk of the tree, but over time it may be present high in the trunk or in major canopy branches. However, once established, wetwood bacteria colonize the heartwood tissues where they may persist for decades without ever causing any harm to the tree. Wetwood bacteria do produce enzymes that can degrade primary cell walls and other intercellular material, causing some weakening of the wood. But, they lack the ability to cause decay that would result in reductions in wood density. At times, it has been shown that wetwood fluids under pressure expand radially into functional sapwood tissues, clogging xylem vessels and inducing water starvation. These symptoms would manifest as leaf scorch, wilt and a general canopy dieback. In elms, the symptoms may resemble Dutch elm disease, complete with vascular staining.

Within colonized heartwood tissues, wetwood bacteria help to infuse water into the wood, thriving in the anaerobic environment. Their metabolic actions lead to increases in gas pressure, primarily from methane. When this pressure is released, through a branch crotch, seam or pruning cut, large volumes of fluid can be released. The fluid is a mixture of bacterial and yeast cells and water. Free-living bacteria, yeasts and filamentous fungi on the surface of the bark are stimulated and grow within the fluid as well. This thick, slime-like fluid is often dark in color as it streams down branches or the main trunk. This is how the term “slime flux” became popularized, especially when the fluid was forcibly sprayed out of pruning cuts. Wetwood slime stains the bark and when dry it appears gray, pale brown to yellow in color. Stained bark from wetwood fluids is commonly observed on mature elms in the landscape.

There is no preventive treatment or way to eliminate wetwood from an affected tree. Properly prune trees to promote rapid closure of pruning wounds if avoiding bacterial colonization if wetwood is a concern. When removing branches from trees known to have wetwood, such as American elm, disinfect cutting surfaces with 70% ethyl alcohol between each cut. At one time, the installation of drain pipes in the lower trunk was commonly performed to drain fluid from the heartwood. However, drilling holes into the colonized heartwood where wetwood bacteria are present breaks the natural compartmentalization barrier around the wetwood and opens it to the spread of wood decay fungi within the trunk. As a result, this practice is no longer performed, but drain pipes may still be observed today on old American elms.