Vegetable scouting sheets can be found on the UMass Extension Vegetable Program website. When not given here, refer to the New England Vegetable Management Guide for scouting thresholds and treatment options.

Alliums: Onion thrips: Found while scouting in Chittenden Co., VT and Hampshire Co. and Bristol Co., MA, though populations were below threshold at all sites. Higher numbers of thrips were found in onions on bare ground compared to those on plastic. This means that thrips are active; so, time to get out and scout for this pest! Treat if thrips reach 1 per leaf. Onion maggot: We are now past peak flight, and yellow sticky cards in scouted fields are capturing <10 adult flies per card over 2 weeks. If adults were present in your field, eggs will be hatching now so start looking for signs of damage from larval feeding such as wilting.

Basil downy mildew has been found on mail order plants in CT and VA coming from a large, internet-based plant retailer. These plants are now “out of stock” and are no longer being distributed, however, inoculum may now be in your area. 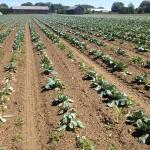 Brassicas: Cabbage root maggot: Maggots are active throughout MA, and eggs and maggots are present in Washington Co., RI. While cabbage root maggot has been very active in most of MA, none were found in an untreated field in Plymouth Co., MA. Poor efficacy has been reported with Lorsban and Verimark, perhaps because dry weather prevented these materials from getting to the root zone where they are needed. The first generation of this pest is now complete and pupae are forming in some fields. Flea beetle is continuing to cause significant damage to establishing brassicas (even waxy leafed varieties) in Franklin Co., MA, Washington Co., RI and locations in ME. Treat if feeding is impacting marketable yields. Imported cabbage worm: Found above threshold in Plymouth Co., MA (over 40% infestation). This is an early emergence for this pest. Scout now.

Corn: European corn borer: Based on the accumulated growing degree days (Table 1), European Corn Borer (ECB) has emerged, and egg laying has begun in some locations. Where egg laying has begun, it is time to release Trichogramma ostriniae for biological control! Timing is key for effectiveness; once eggs are hatched it’s too late! Both the New York (EII) and Iowa (Z1) strains are now being captured. Adult moths have been captured in three locations in MA and NH (Table 4); trapping locations in VT and RI will begin reporting on ECB flight next week. For growers using row cover, track peak flight to determine when it is safe to remove them. Scout emerging tassels for the presence of ECB larvae by inspecting the tassels of 50 to 100 plants, in groups of 5 to 20 plants, throughout the field. Treat if more than 15% of the plants have one or more larvae present. If you have early corn in silk now, this corn will attract the most egg-laying, but treatment decisions should not be based on scouting. ECB will lay eggs at the base of the ear and emerging larvae will bore directly into ears. Therefore, if you have silk now and GDDs indicate that ECB is laying eggs (~450 GDD), one or two insecticide applications can be effective for controlling ECB on this advanced corn. Egg hatch is predicted to occur at 550 GDD.

Cucurbits: Striped cucumber beetle: Cucumber beetles were reported above threshold of 1 beetle per 2 plants in a high tunnel in Hampshire Co., MA, and in a field in Washington Co., RI. One striped cucumber beetle observed in Bristol Co., MA. See more information in article this issue.  Squash vine borer flight is expected in parts of MA and NH; time to put out heliothis traps in summer squash, zucchini, or pumpkin fields to monitor this pest on your farm.

Solanaceous: Colorado potato beetle: Adults, eggs and small larvae were observed in Washington Co., RI this week, where they were above threshold: 56% of observed plants had adult CPB, 60% of plants had egg masses, and 26% had small larvae.  However, a scout in Plymouth Co., MA did not find any CPB present in an untreated field. Thresholds are (per plant, or stalk once plants reach 12”): 0.5 Adult, 4 small larvae, or 1.5 large larvae. Keep an eye out for CPB as they emerge! Botrytis gray mold on greenhouse tomatoes was reported in Washington Co., RI this week, after rains and cooler temperatures. The tomatoes were spaced very close, with two leaders.  Removing lower leaves up to the first fruit cluster is recommended to increase airflow. 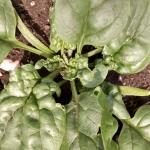 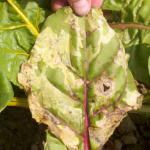 Multiple Crops: Leaf miner maggots, like cabbage root maggots in brassicas, have been reported to be causing a lot of damage this year in spinach, chard, and beets. Damage has been reported in the following counties: Hampshire and Bristol Cos., MA, Chittenden Co., VT and Washington Co., RI. Scouting in Plymouth Co., MA, we found maggots in leaves of greenhouse chard but no egg masses or maggots in the field. Largely, the damage from the first generation is done and treatment is not effective once maggots are inside the leaves, though materials with some translaminar activity (spinosad, spinetoram) may have some effect on larvae inside the leaf cuticle. Use of an adjuvant may improve coverage and control.