The demand for potable water (drinking water) for agricultural, residential, and industrial use is expected to increase in the future while our supply of water will remain essentially unchanged. As this demand for a finite supply of water continues to increase, the cost associated with its use will inevitably increase. As a result, water conservation strategies are needed for both economic and judicious reasons. Furthermore, when rainfall is insufficient and water resources become limited, supplemental irrigation required to sustain ornamental plantings such as turf is often the first to be placed on water use restrictions. Under such restrictions professional turfgrass managers and homeowners are forced to maintain functional and high quality turf with less water. Water conservation strategies are routinely practiced in the semi-arid and arid regions, such as the desert Southwest. These strategies include:

In the future, these efficient water use practices will become increasingly important, even in the humid Northeast.

During periods of drought both avoidance and tolerance mechanisms are operating to ensure turfgrass survival. Drought avoidance adaptations, however, are most Important to turfgrass managers because these allow for turfgrass survival (without dormancy) and provide for sustained growth and function (although at reduced levels) during drought stress periods. Avoidance mechanisms are short-term adaptations that allow plants to 'avoid' tissue injury during drought by postponing tissue dehydration through development of deep and extensive root systems and shoot characteristics that reduce evapotranspiration (ET) rates. Evapotranspiration is the sum total of water lost to the atmosphere due to evaporation from the soil surface plus transpirational water loss associated with leaf surfaces. In high quality turf where 95% of the soil surface may be shaded by leafy vegetation, the major contributor to ET is transpiration Cultural practices that promote extensive root development are important for enhancing drought avoidance The more extensive the root system, the larger the soil moisture reservoir available for plant use Therefore both shoots and roots are important aspects affecting turfgrass survival during drought. 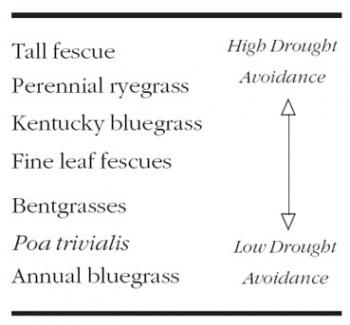 Turfgrass resistance to drought can vary. Tall fescue has the highest drought avoidance and is able to maintain growth and green color for longer periods between rainfall and irrigation events when compared to other cool-season species (see chart below). It is important to recognize that within species, cultivars (varieties) vary significantly in rooting characteristics and ET rates, which contri bute to a wide range of differences in drought avoidance. Superior drought avoidance can result from deep rooting potential or low consumptive water use, but preferably both. For example, tall fescue's superior drought resistance is due to a deep and extensive root system but as a species tall fescue has the highest consumptive water use rate. The deep rooting potential in tall fescue can compensate for its high ET rate, affording it superior drought avoidance. Drought resistance is an integration of both shoot and root components. However, reducing turfgrass ET rate is still an important water conservation strategy in irrigated turf.

The size of the plant-available soil moisture pool (reservoir) is determined by rooting depth and soil texture. Soil moisture-holding capacity is largely determined by soil texture. There are substantial differences in the amount of plant-available water that a soil can hold. For example, coarse sands have a soil moisture holding capacity of only 1/2 inch of water per foot of soil; fine sands can hold up to 2 inches of water, and clays can hold up to 4-1/2 inches of water per foot of soil. These amounts are total soil water and only half of this amount is considered available for plant uptake. A good rule to prevent turfgrass wilting is to irrigate when approximately 50% of the plant available water has been depleted from the rootzone (i. e., lost to the atmosphere as ET). 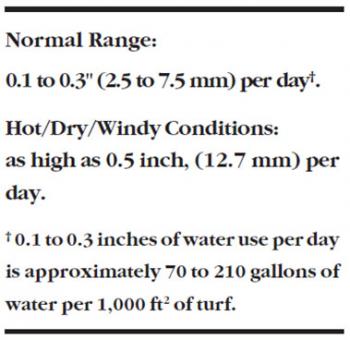 Reducing irrigation requirements by reducing turfgrass ET can be accomplished by selecting species or varieties having low water use rates. However, a variety's relative water use rate is not necessarily predictable (consistent) in all possible environments and significant shifts can be expected. For example, the water use pattern of a cultivar (variety) evaluated in one location (the humid Northeast) can be different in its response when evaluated in another location with distinctly different evaporative conditions (for example the humid Southeast or arid Southwest). Turfgrass managers need to be aware of this and should extrapolate water use results and recommendations from other regions with caution when developing turfgrass water conservation strategies.

Irrigations Requirements Based on Soil Texture 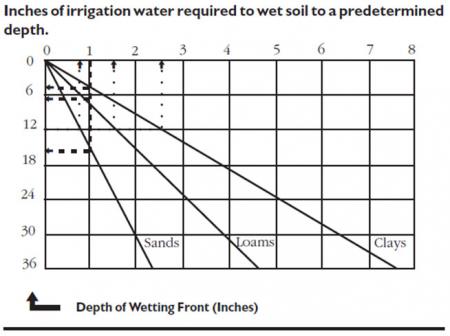