The brown marmorated stink bug, Halyomorpha halys (Stål), is a voracious plant-eating pest that is damaging fruit, vegetable, and ornamental crops in North America. BMSB was accidentally imported from Asia to North America in the late 1990s.  The earliest sightings were in Allentown, PA.  This bug quickly became a nuisance pest, overwintering in homes, office buildings, sheds, warehouses and in wooded areas. With few natural predators and an abundance of food sources, the invasive insect spread quickly. By 2004 the stink bug was widely identified on farms and in forests. In 2010, the invader caused catastrophic damage in many mid-Atlantic states, with some growers of sweet corn, peppers, tomatoes, apples, and peaches reporting total losses that year. In 2011 the stink bug continued to present season-long and significant problems for growers in that region.  Sightings and trap captures of BMSB have been increasing in states to the north as well.

Extension scientists in MA have been tracking this pest since 2012, using pheromone baited traps.  The number of brown marmorated stink bugs captured in these traps has reamained low.  In the early years of an area’s invasion, most sightings and captures come from private dwellings, sheds, roadsides, and automobiles.  The insect populations build up for a few years in the woods, feeding on seeds and fruits and can move into crop lands later in the season.  In Fall 2012, a few were trapped in peaches in Hampden County, MA, near Springfield, and others were sighted near-by in apples. Each year a trapping network is established throughout the state in anticipation of increased populations of this pest. This has been a joint effort of the UMass Fruit Team, Barstable County Extension, MDAR, and private crop consultants. Economic damage from this pest has yet to be confirmed in Massacusetts orchards. In 2018, the trapping network includes 15 farms and orchards ranging across the state.

Trap captures will be a good indication of BMSB activity in the environment of the orchard edge, but they are not yet reliable indicators of insect damage in the crop. Direct observation of bugs and feeding damage is necessary for that.  Scouting in peaches and cherries (and later in apples, sweet corn, peppers) at the wooded edges of fields is recommended. The robust qualities of BMSB and the ecological niches in which they are thriving here make them very hard to kill with reduced-risk insecticides.

While management of this pest can be tricky, often requiring restricted use materials, there is good news in the form of a parasitic wasp. Trissolcus japonicus, a stinger-less wasp, has been discovered in the wild at a number of US locations. This "samurai wasp" lays her eggs in the eggs of brown marmorated, and other, stink bug. As the samurai wasps hatch from their eggs, they feed on the content of the stink bug eggs. 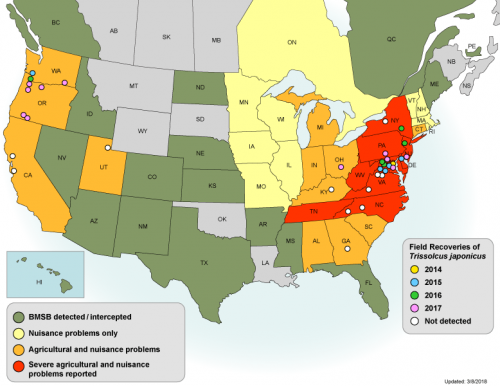 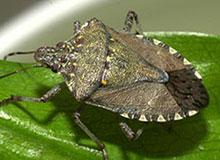 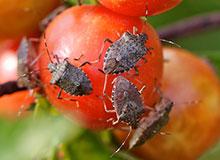 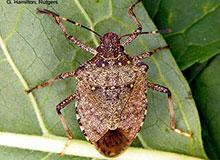