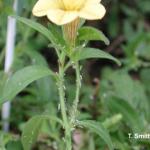 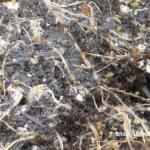 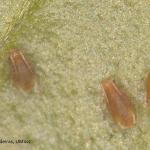 About 30 different species of aphids can be found in greenhouses, depending on the crop. Aphids are generally less than 1/8 inch long, soft-bodied insects with long legs, long antennae and a pair of tube-like structures call cornicles projecting from the posterior end. Aphids may occur in large colonies on new growth, at the base of buds, or on the undersides of mature leaves. There are many species of aphids which range in color from greenish-yellow to very dark green, dark brown to black and even pink. Some have wings, which are transparent with very few veins and are held vertically over the body when not in use.

Many aphid species reproduce sexually only under specific environmental conditions, often those associated with the onset of winter. During spring and summer, reproduction is asexual, with unmated adult female aphids giving birth directly to live young, all of which are female. This process, coupled with the high funcundity of many aphids (some species giving birth to as many as 60 to 100 young nymphs over a period of 20 to 30 days) and the quick maturation of aphids (as little as 7-10 days between generations) allows populations of aphids to increase quickly. At high densities, winged females may appear in aphid colonies. These winged individuals then move to new, less crowded host plants. Outdoors, many aphid species pass the winter in the egg stage. In greenhouses, aphids may continue to reproduce asexually, via live birth, indefinitely. Some species are found on only one, or at most, a few host plants, while others have a wider host range. The common aphid species that are encountered in greenhouses include green peach aphid (Myzus persicae), melon/cotton aphid (Aphis gossypii), foxglove aphid (Aulacorthum solani), and root aphid (several species).

The green peach aphid is mentioned most often because of its worldwide distribution, very wide host plant range (more than 400 plants), virus disease transmission (more than 150 virus strains), and difficulty of control.

Green peach aphid: This aphid species can be distinguished from the melon/cotton aphid by the length and color of the cornicles (the tube-like protrusions extending from the end of the abdomen). Green peach aphids have long (approximately the length of the body) cornicles and only the tips are black. In addition, the head has a distinct indentation at the base of the antennae.

Melon/cotton aphid: The cornicles on melon/cotton aphid are short (approximately 1/3? or 8.0 mm, the width of the body) and vary in color from light yellow to very dark green (making them appear black). The antennae are typically shorter than the body. Melon/cotton aphids do not have a distinct indentation at the base of the antennae like that of the green peach aphid.

Foxglove aphid: Foxglove aphids have green flecks located at the base of their cornicles. In addition, they have black markings on their leg joints and antennae. Foxglove aphids tend to fall off plants when disturbed and they can cause severe leaf distortion, more so than the green peach and melon/cotton aphid.

Root aphids such as the sugarbeet root aphid (Pemphigus betae) overwinter as eggs and infests plants in the spring and fall. Root aphids may be misidentified as mealybugs because they are covered with white wax although they are smaller than mealybugs. Root aphids have reduced cornicles that resemble rings, which are located on the end of the abdomen. These cornicles can be seen when magnified.

Sanitation is an important part of aphid control. To prevent the introduction of new aphid species into your greenhouse, carefully inspect all new plants before placing them in the growing areas. Eliminating all weeds in or near the greenhouse can be useful because it will help suppress potential reservoirs from which aphids might enter the crop. Winged aphids can easily move from the outdoors into greenhouses through open vents and establish on crop plants. To detect aphids early, several plants on each bench throughout the greenhouse should be checked on a weekly basis, particularly those species of plants that most often host aphids. Inspect the young growing tips, stems and buds of aphid prone plants and note which cultivars are the most susceptible. Signs of an aphid infestation include the presence of white cast (molted) skins, honeydew, and black sooty mold fungi. Yellow sticky cards can capture winged aphids that have entered the greenhouse from outdoors, particularly during spring and early summer. Since most aphids are wingless, the use of yellow sticky cards is not a reliable indicator of the population levels of aphids within the greenhouse. Direct visual inspection of the crop is required.

Young aphids of some species may reside between scales of leaf buds or in flowers. This reduces their contact with nonsystemic pesticides and repeated applications may be needed for control. Pest control materials (insecticides) with contact, translaminar, or systemic activity can be used to control aphids. Translaminar means that after application the material penetrates leaf tissues and forms a reservoir of active ingredient within the leaf. This provides extended residual activity even after spray residues dissipate. It is important to rotate insecticides with different modes of action to delay the onset of resistance. Insecticide applications must be initiated early in the cropping cycle, when plants are small.

Coverage of plant parts with wettable or soluble powder formulations may be improved by the use of surfactants. In some instances, insecticidal soaps and/or horticultural oils may provide control of aphids, particularly when populations are low. However, since these insecticides kill exclusively by contact and have minimal residual activity, thorough coverage is essential. Insect growth regulators and pyrethroid-based insecticides may also provide control of aphids.

Aphids have many natural enemies and several are commercially available for release in greenhouses. Some are predators, which hunt and feed on aphids. Others are parasitoids, which lay their eggs inside of the aphid. When the eggs hatch, the larvae consume the aphid.

Below are descriptions of several commercially available aphid predators:

Note about adult Hippodamia convergens (Convergent lady beetle)
When just starting out using biocontrol agents, many growers first think about using the well known and familiar "ladybug" (Hippodamia convergens) for aphid control.  Ladybird beetles are relatively inexpensive and can be stored in the fridge. However, there are some concerns with using adult ladybeetles to control aphids. Wild collected ladybeetles for sale are field collected from mountainous areas of the west coast states where the beetles migrate and aggregate in large masses. Beetles are highly dispersive and once released in greenhouses, most will leave, providing little or no control.

Another concern is that harvested lady beetles may have been parasitized by a small wasp that develops as an internal parasite and kills them.  And finally, Microsporidia, a disease of ladybugs, has also been detected in some shipments.

Green lacewing: The green lacewing, Chrysoperla carnea, is adapted to the environmental conditions typically present in greenhouses. Adults are usually active at night and feed on nectar, pollen, and honeydew. Green lacewing larvae (referred to as 'aphid lions') feed on many aphid species as well as mites and whiteflies. The larvae, which are cannibalistic, must be distributed over a wide area throughout the production facility. Larvae may survive better than eggs. You should observe a reduction in the aphid population after approximately two weeks. Repeat applications are typically required, and control may be hampered if low aphid populations are present. Scouting for green lacewings is difficult because the larvae tend to hide within the plant canopy during the day. Examine leaf undersides for the presence of eggs laid on extended stalks.

Predatory midge: The predatory midge, Aphidoletes aphidimyza, feeds on over 60 aphid species. The midge is nocturnal (active at night), and prefers to reside in dark, humid areas near the lower plant canopy. Only the larval stage is predacious. Adults feed primarily on pollen and honeydew. The bright orange larvae kill aphids by biting their knee joints, injecting a paralyzing toxin and then withdrawing the internal body fluids. Aphidoletes aphidimyza is typically sold as pupae. Adults that emerge from the pupae lay eggs near aphid colonies. Larvae descend to the ground (below greenhouse benches) to pupate, so this predator may be less efficacious in greenhouse facilities with concrete floors. Aphidoletes aphidimyza is most effective during the summer because exposure to short days and low temperatures during winter induces diapause, which is a resting stage. Initiate releases early in the morning or evening near aphid colonies. Greenhouse temperatures should be 60-80ºF (15-26°C), with 50-85% relative humidity. Aphidoletes aphidimyza may be used preventively in combination with aphid parasitoids. When scouting, look for fed-upon aphids, which may appear shriveled and brown or black. The adults are rarely observed since they are active at night.

In general, parasitoids are more effective than predators in reducing aphid populations, although parasitoids may fail to provide acceptable control under warm conditions or at times when aphid populations tend to increase rapidly. Several parasitoids are commercially available. Aphid parasitoids are host-specific in terms of the aphid species they attack. For example, Aphelinus abdominalis and Aphidius ervi attacks potato and foxglove aphids, while Aphidius colemani attacks green peach and melon aphids. Mixtures of different parasitoid species are commercially available and should be used when multiple aphid species are present. Parasitoids are shipped either as adults or 'aphid mummies' from which parasitoid adults soon emerge. To increase the parasitoids' effectiveness, place small groups of the aphid mummies in cups near aphid colonies. Do not let these aphid mummies get wet. Release rates may vary depending on the parasitoid species. Containers often contain approximately 250 aphid mummies, which can treat 5,000 ft2 at the high release rate or 25,000 ft2 at the low release rate.

Greenhouse temperatures should be 65-77°F (18-25°C), with 70-85% relative humidity. Aphid parasitoids must be applied preventively to suppress aphid populations. They are less effective when aphid populations are high and already causing plant damage. Release parasitoids on a regular basis to sustain their populations during the growing season. Remove yellow sticky cards before releasing parasitoids, as sticky cards attract and capture parasitoids. When scouting, look for aphid mummies that have circular holes on one end. These are the exit holes created by adult parasitoids during emergence. Aphid parasitoids are sensitive to some pest control materials. For example, direct applications of spinosad are toxic to A. colemani. For complete information on compatibility of biocontrol agents with pesticides, consult your biocontrol supplier.

Release parasitoids preventively on crops you know are susceptible to aphids, so that the parasitoids will be present when aphids are first noticed. In addition, identify aphids to species before ordering parasitoids, since parasitoids are selective in the aphid species they attack. Some biological control suppliers sell mixtures of parasitoid species, which may be useful when several aphid species are present in the greenhouse simultaneously. Banker plant systems may be useful in controlling aphids and reducing the costs associated with applying pest control materials. Banker plants support colonies of aphids that are not greenhouse crop pests, along with parasitoids.
For more information, see the fact sheet: Aphid Banker Plant System for Greenhouse IPM, Step by Step (from UVM and Biobest).

If aphids are already abundant then you must reduce their numbers before releasing natural enemies. Do not attempt to suppress high aphid populations with predators as this is typically ineffective.

The entomopathogenic fungi Beauveria bassiana and Isaria fumosorosea are commercially available for use against aphids; however, because aphids have high reproductive rates and molt rapidly, especially during the summer, repeat applications are typically required. These fungi are most effective when aphid populations are low. They may not be compatible with predators and parasitoids depending on the concentration of spores applied. For information on compatibility of beneficial insects with biopesticides, contact your biological control supplier.