Learn about these Updates 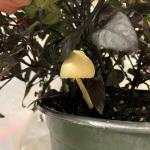 Two potted ornamentals were brought to the UMass Extension Plant Diagnostic Lab this week with small yellow mushrooms growing in them. The mushrooms were identified as Leucocoprinus birnbaumii (Lepiota lutea) commonly known as yellow parasol, yellow houseplant mushroom, or plant pot. In the U.K. they are called “plant pot dapperlings.” These mushrooms are common in potted plants in the home and greenhouse, and are sometimes found in bags of soilless media. These mushrooms are typically harmless to plants and feed on organic matter in the potting media.

Yellow parasols have a bright yellow cap when young, but fade to white as they mature. Caps are textured on top and the gills on the underside are free (i.e. unattached at the stem) There is a ring around the stipe (stalk) below the cap. The caps produce abundant white spores, which may be visualize by leaving the cap overnight on a dark surface.

Despite the fact that they look like mushroom-shaped PeepsTM candy, these mushrooms are inedible. Although it is generally held that ingestion may only cause “mild gastrointestinal distress,” their exact level of toxicity is unknown and they should not be eaten. If these mushrooms are a concern in the home or greenhouse, they may simply be removed and discarded. Plants may also be placed outdoors or in areas inaccessible to children and pets. Avoid overwatering. The potting medium may be replaced, but once the fungus is established it can be difficult to get rid of.