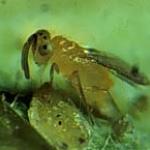 Whiteflies continue to be the most important insect pest in poinsettia in the northeastern United States. Most crops are either treated with at-planting applications of the systemic pesticide Marathon® or sprayed multiple times later in the crop cycle with various other insecticides. In the fall of 2000, a survey of 22 Massachusetts poinsettia growers found that they were making an average of 8.3 pesticide applications for whitefly control, at a cost of $0.14 ± $0.02 (SE) (Van Driesche et al. 2002). Significantly, only 7 of 22 growers were able to achieve full season whitefly suppression with just the use of Marathon at planting; the other 15 growers all needed to apply additional foliar insecticides later.Whitefly populations were monitored in alternate weeks by staff of our laboratory and an employee of the producer.

The greenhouse range under biological control management was divided into east and west sections that were separated by an internal space for movement of machinery. Both sections were physically inside one very large greenhouse(23,520 sq. ft.). The trial began September 9, 2002 when the range was filled with untreated plants. The plants had been potted in mid-August in another greenhouse and left without whitefly controls of either a chemical or biological nature. The trial ended December 4th, once 50% of the plants had been removed for sale. On October 16th, the grower introduced an additional 783 Winter Rose poinsettia plants from a different greenhouse. These plants had not been treated with Marathon prior to their introduction into the biological control area and were infested with whiteflies at levels (4.2 . ± 1.1 SE live nymphs and pupae per leaf when introduced) that were very high for so early in the crop. These plants were placed as a block on the far west side and acted as an undesired source of adult whiteflies for the remainder of the plants in the test greenhouse, especially those in the West block.

In the East block, 6 parasitoid releases were made (weeks 3, 6, 7, 8, 9, 10) and three insect growth applications (using Enstar II®, because Precision®, the material used in our previous tests, was no longer available) were made in weeks 4, 5, and 9 ( October 2nd and 9th and November 5th). (We did not recommend the third treatment, which was only applied by the grower because the other half of the greenhouse was being treated). Whiteflies were suppressed for the entire cropping period to levels below the at-harvest target threshold of 2.0 live nymphs+pupae per leaf and at harvest plants had 1.1 ± 0.1 SE live nymphs+ pupae per leaf (Fig. 1).

West block was filled with plants one week before East block. The grower made 8 parasitoid releases, in weeks 2, 3, 6, 7, 8, 9, 10,11). Enstar II was applied three times, in weeks 4, 5, and 9 on the same dates as East block. West block whiteflies counts exceeded the target threshold (2.0) on two dates each in October and November and had 4.0 ± 0.5 SE live nymphs+ pupae per leaf at sale on December 4th (Fig. 1). Higher whitefly densities in West block were caused in large measure by the introduction on October16th of the Winter Rose plants. The edge of the block in contact with the Winter Rose plants was the most strongly affected. At harvest, West block plants exceeded our target threshold, but grower assessment of plant quality was favorable and plants were readily sold.

Winter Rose plants, which were placed next to the West block plants on 16 October, were also sampled weekly. These plants had 4.2 ± 1.1 SE whiteflies (N+P) per leaf when introduced, but this increased to 6.4 ± 2.4 SE within one week. We immediately recommended treatment with Marathon, as removal to another greenhouse was not possible. Marathon was not applied until October 30th. In addition, this block of plants was treated twice with foliar applications of Enstar II (October 10th and November 6th), even though it was difficult to obtain effective coverage. At harvest, this group of plants had 3.8 ± 0.5 SE live N+P per leaf.

Costs of the biological control+IGR applications (inclusive of shipping) for the East and West blocks were U.S. $0.10 per plant and $0.14, respectively. This was based on the application of two packages of 10,000 E. eremicus pupae (purchased from Syngenta) on each release date. This number of pupae and the numbers of plants in test greenhouse, together with an assumed 50/50 sex ratio and 70% emergence rate, suggests a parasitoid release rate of ca. 0.45 females per plant was achieved. The price for biological control in this trial is lower than in previous trials because fewer total applications were made, in part because the grower did not start the biological control program until ca three weeks after planting, and applied an IGR in three weeks (rather than two as recommended), thus reducing the number of parasitoid applications in his 15 week crop from an expected 13 to actual 6-8. However, it is noteworthy that even this reduced frequency of parasitoid releases maintained control on the East block, in the absence of a source of whitefly-contaminated plants (i.e., the Winter Rose plants).

The per plant cost of biological control in this crop ($0.10 to $0.14) compares to $0.13 for chemical control (exclusive of labor) for the same grower in 2001, when he applied Marathon and nine other pesticides (one or more applications of each) to suppress whiteflies in the same greenhouse (based on spray records supplied to us by grower). An exit interview with the grower found a high level of satisfaction with the biological control program ("It [Eretmocerus eremicus] worked out well for us. We will use it again in 2003 and will try to start with a house full of plants.").

In conclusion, production of this crop (as part of a Massachusetts extension effort to assist growers interested in implementing biological control measures) has demonstrated that sufficient information exists for northeast poinsettia growers to be successful in use of biological control for whitefly management and produce crops that meet the target threshold for whitefly suppression, with consequent good market acceptance. Costs were also acceptable to the grower, especially relative to his past need for application of ten different pesticide products in his poinsettia crop the previous year. This trial demonstrates that New England growers can use biological control to suppress whiteflies in poinsettia at a price competitive with pesticides and that the finished plants are high quality and readily sold. This experience emphasizes the value of regular scouting and the need to recognize sources of whiteflies within the greenhouse that can disrupt effective control programs.

FIGURE CAPTION Figure 1. Densities of live whiteflies per leaf in poinsettia in three parts of a greenhouse managed with releases of the parasitoid Eretmocerus eremicus near Boston, Massachusetts in 2002. 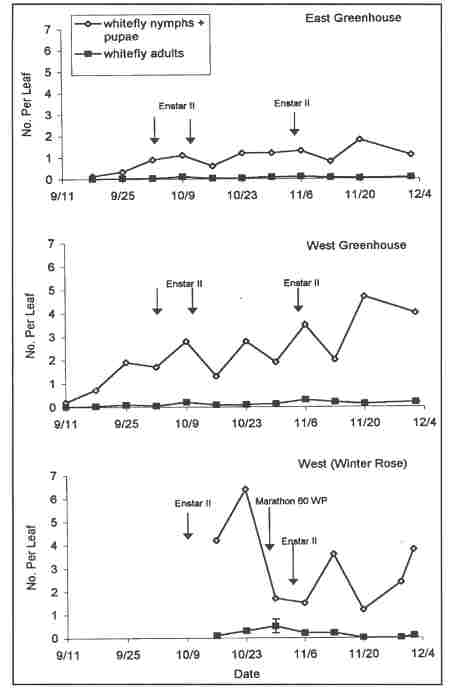