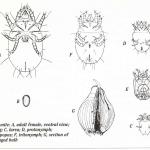 Mites belong to the order Acari of the class Arachnida (spiders, daddy-long legs etc.). Mites are very small and in contrast to insects, they are wingless and the head, thorax and abdomen appear to be fused together, generally giving the body a compact oval to oblong shape. Sex in many species is determined by fertilization; males develop from unfertilized eggs, females from fertilized eggs. The newly hatched young, called larvae, have only three pairs of legs. The larval stage is followed by two nymphal stages (a protonymph and a deutonymph) and by the adult stage. The nymphal and adult stages have four pairs of legs. Many species of mites are plant feeders and cause damage to crops with their piercing-sucking mouth parts.

Bulb mites (Rhyzoglyphus species) infest bulb crops (amaryllis, crocus, freesia, gladiolus, hyacinth, lily, narcissus and tulip) and especially those with loose fleshy scales. The two most common species of bulb mites that cause damage are Rhyzoglyphus echinopus and R. robini. Damage caused by bulb mites is usually not seen until populations are extensive. Bulb mites are considered secondary pests commonly associated with decaying organic matter as a result of damage caused by fungus gnat larvae and soil-borne root pathogens. However, bulb mites do feed upon the bulb's scales, penetrating the basal plate or outer skin layers and feeding injury provides entry sites for soilborne fungal pathogens such as Pythium, Rhizoctonia, and Fusarium.. Bulb mites that establish in the inner layers are difficult to control. Infested bulbs show reddish-brown discoloration on the fleshy scales and frequently rot prior to or after planting. Should the infested bulb grow, the leaves will be stunted, distorted and soon turn yellow. The flower stalk will be destroyed or will fail to develop. In storage at temperatures above 50°F, the mite will continue to multiply and will migrate to other bulbs, thus infesting the entire stored lot. Lightly infested bulbs held in cold storage below 50°F may still become seriously infested during shipment, on store shelves or after planting, whenever temperature conditions become favorable.

The adult bulb mites are yellowish-white, often tinged with pink, with reddish-brown mouth parts and legs. The female is minute, approximately 1/25-inch long. The male is usually smaller; a 10X hand lens is necessary to detect it. The mature forms move around freely. The pest is most active when the humidity is high and the temperature is between 60° and 80°F. At temperatures below 50°F and above 90°, the mite becomes inactive.

The female may live for about a month, while the male dies soon after mating. The eggs are white, minute and laid singly on the bulbs. They hatch in 2 to 7 days. A female may lay 50 to 100 eggs at the rate of six to eight per day. Under favorable conditions, an entire life cycle may be completed in 2 to 4 weeks. In addition to the larval stage and the two nymphal stages, the bulb mite has an additional nymphal stage called the hypopus stage due to overcrowding. The mite in this stage is minute, eight-legged, oval and does not feed. It is covered with a thick brown cuticle, and is well adapted to withstand unfavorable environmental conditions. In this most active stage, the mite is able to wander about and be transported considerable distances by attaching itself to objects and to insects such as adult whitefly, thrips, fungus gnat, or shore fly, visiting the rotted bulbs. The hypopus stage may last up to 2 weeks and when a suitable host plant is found, it molts into the deutonymph, which in turn molts into the adult stage.

At planting time, the forcer should be certain that the bulbs are sound. Bulbs which are soft when squeezed should be destroyed at once, preferably placed in boiling water. They should not be allowed to accumulate on the premises. Hot water treatment for preplanting sterilization often weakens the bulbs and should be used only as a last resort. This is done by immersing infested plants in 110°F water for 30 minutes. Currently, no miticides are labeled to control or regulate bulb mite populations in greenhouses.

According to Raymond Cloyd, Kansas State University, bulb mite populations may be suppressed by using the soil-dwelling predatory mite Hypoaspis aculeifer, which is commercially available. The nymph and adult stages of H. aculeifer feed on all life stages of R. echinopus. However, immatures (larvae and nymphs) and adults prefer to feed on the immature stages of R. echinopus, not the adults. The ability of H. aculeifer to suppress bulb mites depends on level of infestation and exposure to the predatory mite. Bulb mites may be located in the inner folds (layers) of bulbs, which may be more difficult for the predatory mite to locate.

Gentile A.G. and D.T. Scanlon. A Guide to Insects and Related Pests of Floricultural Crops in New England. University of Massachusetts Cooperative Extension System. Revised 1992. Out of print