Damping-Off of Bedding Plants and Vegetables 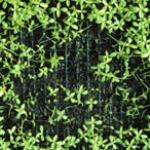 Damping-off is a disease of germinating seeds and seedlings caused primarily by fungi. Within days, hundreds or thousands of seedlings can become colonized resulting in plant losses and delayed planting or shipping. Healthy appearing plants selected from flats with damping-off may develop root rot or stem canker several weeks later. With some damping-off fungi, foliar blight may also occur. Pythium, Phytophthora, Rhizoctonia and Alternaria are fungi that commonly cause damping-off. There are many other species of fungi that occasionally cause this disease.

Fungi may attack germinating seeds or young seedlings. If poor plant emergence occurs, inspect the soil. If the seed has not germinated it may have been subjected to unfavorable environmental conditions or it may be old. If germination has occurred and the hypocotyl (emerging shoot) is water-soaked in appearance or visibly decayed, fungi are the most likely cause.

Seedlings often develop a darkened or shriveled "wire stem" appearance at the base of the stem. The top of the plant may appear healthy when it falls over but quickly wilts and dies. The roots may or may not be decayed. When seeds are germinated in flats or beds, the disease often occurs in a roughly circular pattern. This is because of the tendency of fungi to grow radially from the point of origin. If there is a lot of fungal contamination, a circular pattern will not be apparent. In plug trays, spread occurs by splashing irrigation water resulting in a more random distribution of disease. The plug cells inhibit the radial growth pattern seen in flats of soil.

Unfavorable environmental conditions and cultural practices can result in seedling death that resembles damping-off. Hot water from sun-baked pipes and hoses, over-fertilization, low temperatures, drought, heat stress and chemical injury can all kill seedlings. However, in most of these cases initial symptoms occur on the foliage or upper part of the seedlings. When the seedlings collapse, the stem at the soil line is usually firm and healthy and the root system is unaffected. An exception to this would be over-fertilization which usually causes roots to appear desiccated and shriveled.

Some fungi such as Alternaria are typically seed-borne rather than soil-borne. Alternaria may cause foliar blights on plants as well. Soil-borne fungi such as Pythium, Phytophthora, Rhizoctonia and Sclerotinia may be present in untreated or improperly treated field soil. While not impossible, it is unlikely that soil-less media are contaminated when purchased. However, these fungi can easily be transferred to the growth medium by soiled tools, hands, or hoses and splashing water from infested soil.

Prevention is most important. Avoid contamination of the growing medium and purchase quality seed. Use a soil-less medium. Keep flats off of dirt floors. Hang up the hose ends. When disease occurs, have the cause determined. Drench the medium with a broad-spectrum fungicide or a mixture of fungicides.

When damping-off occurs in a flat, discard the entire flat. Healthy appearing plants may carry contaminated soil and may develop root rot or blight at a later date.

Fungicides for Pythium and Phytophthora

Key
*Crops: Crops registered for use.

See labels for rates and a complete explanation of precautions and restrictions.

Note: More than half of Pythium isolates cultured from greenhouse grown plants have been found to be resistant to Subdue Maxx. Do not use the same fungicide repeatedly, and rotate outside of a fungicide group.