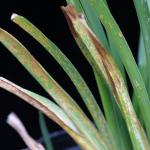 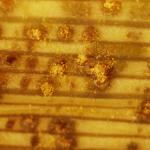 Daylilies have generally been considered to be care-free, and this is one reason for their extensive use in landscapes, however, diseases such as daylily leaf streak and daylily rust pose a threat to the daylily industry. Daylily rust (Puccinia hemerocallidis) was first found in the US in Georgia and Florida in 2000. Since that time, this rust has been found in most other states including New York and Massachusetts. Daylily rust is native to Asia and thought to have entered the U.S. on plant material from Central America.  Growers and sellers of daylilies are strongly advised to purchase disease-free stock plants from reputable sources and to propagate only from healthy specimens to prevent bringing the disease into greenhouses, nurseries, and landscapes.

Rust first appears on the leaves as small water-soaked spots. The spots expand and become raised to form a pustule in the center, which releases powdery spores. The spores of daylily rust are bright orange and are produced on both the upper and lower leaf surfaces. While daylily cultivars will respond differently, the infected leaf often turns yellow first and then the entire leaf becomes necrotic and dries up. So far all infections have been found on the foliage; it is not known whether tuber infections occur.

Daylily rust can easily be seen on the foliage with a 10X hand lens. A good field test to identify it is to wipe suspected pustules with an ordinary white facial tissue. An orange-yellow stain on the tissue will result if the rust is present on the leaves. Daylily rust can easily be confused with other leaf problems, especially leaf streak disease, caused by Aureobasidium microstictum. No orange stain will result on a tissue if the problem is leaf streak disease.

Like other rust pathogens, daylily rust produces spores that are spread from plant to plant primarily by wind. Spores may also be spread by human activity and by splashing water from rain or overhead irrigation.

P. hemerocallidis is a heteroecious rust, which means that two distinct host plants are required for the completion of the full life cycle; however, on daylily this rust produces urediospores, a type of spore that may be produced repeatedly and does not require the alternate host to be present. This means that once a daylily plant is infected, the disease can spread rapidly to other daylily plants. The alternate host is the perennial Patrinia in the Valerianaceae family. Six species of Patrinia are sold and grown across the U.S. as ornamentals.

Following inoculation of daylily leaves, infections can appear in as little as two to three days. Not only does the rust have a short incubation period, but it also spreads fairly quickly in nurseries. Over-wintering experiments indicate that daylily rust does not overwinter in Massachusetts.

Most species of rust fungi are highly host specific. P. hemerocallidis infects only daylilies (Hemerocallis species) and Patrinia. Hostas were once considered susceptible as well, but research has demonstrated that this is not so.

Daylily varieties differ widely in susceptibility to rust. In Massachusetts daylily rust was diagnosed on the "Twice as Nice" daylily collection. The cultivars 'Raspberry Candy' and 'All Fired Up' are the two cultivars in this line that have shown the worst symptoms, with other cultivars, such as 'Moonlight Masquerade', showing less severe symptoms. There are fourteen cultivars in this product line.

Commercial flower growers and garden center managers who have plants suspected of rust infection should send samples for confirmation to the UMass Extension Plant Diagnostic Lab. Leaf samples should be placed between dry paper towels and then placed in a plastic bag before packaging for mailing. Please do not add water or moisten paper towels. The standard diagnostic fee will be charged. please see https://ag.umass.edu/services/plant-diagnostics-laboratory or call 413-545-3208 for further information.

Sanitation is critical for successful management of this disease. REMOVE AND DESTROY ALL INFECTED PLANTS. Treat uninfected daylilies with an effective fungicide according to label directions. Strobilurins, DMIs, and mancozeb are most commonly used. Growers are advised to check labels for broad crop clearance before use and to test on a small portion of the crop before applying to entire crop. Follow all label directions carefully- the label is the law. Monitor treated plants carefully for symptom development. Keep in mind that this disease affects only daylilies and Patrinia, so spraying other crops is unnecessary.