Daylilies (Hemerocallis spp. L.) are planted extensively throughout the United States and thousands of varieties have been developed. Once established in a landscape, daylilies require little maintenance, are drought tolerant, have no special pH or fertilization requirements, and are generally disease and insect free. Since 2000, however, daylily streak and daylily rust have emerged as potential threats to the daylily industry. Daylily rust is caused by Puccinia hemerocallidis and daylily streak is caused by Aureobasidium microstictum. Both of these pathogens are fungi and the diseases they cause can be similar in appearance. A quick diagnostic test is to run your finger along the underside of leaf lesions; an orange, powdery residue will result from the spores of daylily rust. 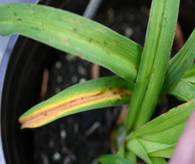 Initial symptoms of daylily streak are a central, yellow streak along the leaf midvein that often starts at the leaf tips and progresses downward. This initial streak is followed by necrosis both in the surrounding green tissue and the yellow streak itself. Small reddish brown flecks and oval, elongated necrotic lesions develop on infected foliage. Diseased foliage may wither and die completely. Daylily streak can be avoided by purchasing disease-free stock plants and propagating only from healthy plants. Cultivars differ in their susceptibility to this disease, so proper variety selection is important for disease management. Daylily streak is primarily spread by splashing water, so proper plant spacing and minimizing overhead irrigation can slow disease development. The pathogen can also be disseminated by workers and tools, especially when leaves are wet. Leaf streak fails to develop when temperatures are above 90° F. Isolate infected plant material from healthy daylilies. Fungicides may be applied to protect susceptible new foliage and effective materials include: thiophanate methyl (Cleary's 3336, FungoFlo), myclobutanil (Eagle), chlorothalonil (Daconil, Echo 90DF), and azoxystrobin (Heritage). 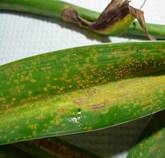 Daylily rust was first found in Georgia and Florida in 2000 and has since been found in most other states, including Massachusetts. P. hemerocallidis is native to Asia and is thought to have entered the United States on infected plant material from Central America.  The disease first appears on the leaves as small, water soaked spots which expand and become raised to form pustules on both upper and lower leaf surfaces. Yellow-orange to orange-red spores are released from these pustules and can be carried by wind, water, workers, and tools. Although different cultivars react differently, most often infected leaves yellow, turn necrotic, and dry up. It is not known whether infection of tubers occurs. P. hemerocallidis requires two distinct hosts to complete its life cycle (heteroecious rust). The alternate host is the perennial Patrinia: six species of this genus are grown and sold as ornamentals. However, on Daylily P. hemerocallidis produces polycyclic or repeating stage spores (urediospores) and does not require the alternate host for disease development. Once a daylily plant produces spores the disease can spread rapidly to other plants. Following inoculation of leaves, infections can appear in as little as two to three days. Not only does the rust have a short incubation period, but it also spreads fairly quickly in nurseries. Like most rust fungi P. hemerocallidis is highly host specific: it infects only Hemerocallis and Patrinia.

Daylily varieties differ in susceptibility to the rust. In Massachusetts daylily rust was diagnosed on the "Twice as Nice" daylily collection. The cultivars 'Raspberry Candy' and 'All Fired Up' are the two cultivars in this line that have shown the worst symptoms, with other cultivars, such as 'Moonlight Masquerade', showing less severe symptoms. There are fourteen cultivars in this product line. Varieties in other states which have been reported to be affected since 2000 include: Attribution, Gertrude Condon, Crystal Tide, Colonel Scarborough, Starstruck, Joan Senior, Imperial Guard, Double Buttercup and Stella De Oro. Symptoms range from bright yellow spots to streaks.

Commercial flower growers and garden center managers who have plants suspected of rust infection should send samples for confirmation to the UMass Extension Plant Diagnostic Lab. Leaf samples should be placed between dry paper towels and then placed in a plastic bag before packaging for mailing. Please do not add water or moisten paper towels. The standard diagnostic fee will be charged. please see https://ag.umass.edu/services/plant-diagnostics-laboratory or call 413-545-3208 for further information.

Sanitation is critical for successful management of this disease. REMOVE AND DESTROY ALL INFECTED PLANTS. Treat uninfected daylilies with an effective fungicide according to label directions. Strobilurins, DMIs, and mancozeb are most commonly used. Growers are advised to check labels for broad crop clearance before use and to test on a small portion of the crop before applying to entire crop. Follow all label directions carefully- the label is the law. Monitor treated plants carefully for symptom development. Keep in mind that this disease affects only daylilies and Patrinia, so spraying other crops is unnecessary.