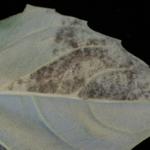 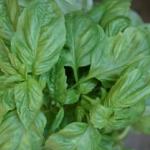 Downy mildew of basil is caused by the oomycete Peronospora belbahrii. The disease was first reported on basil in Uganda in 1930, but did not attract international attention until it appeared in several new locations; Italy (2003), France (2004) South Africa (2005), Iran (2006) United States (Florida, 2007) and Argentina (2008). During 2008 and 2009, the disease occurred throughout the east coast in epidemic proportions both in the field and in greenhouses. Considerable economic losses occurred in Massachusetts during that time and we anticipate basil downy mildew will be a major disease of basil in the US in the foreseeable future. Long distance transport from FL to MA might be explained by aerial dispersal of spores but rapid transcontinental transport probably occurred via infested seed sold internationally. Although the downy mildew pathogen has been detected in basil seed, seed transmission is probably a rare event. Air-borne dissemination from infected plants is more likely.

Few fungicides are labeled for herb plants and there are differences in registrations for field grown plants versus greenhouse plants. Check the labels on individual products. Copper products, phosphites, cyazofamid, mandipropamid, oxathiapiprolin, and azoxystrobin are labeled for use on basil. Many organic products are also labeled for use on basil but efficacy data is lacking. Both conventional and organic products should be used in a preventative manner to protect plants from infection, as few have any curative properties. Consult the New England Vegetable Management Guide for a full listing of products.