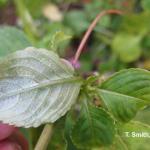 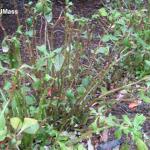 Downy mildew of impatiens is caused by the oomycete Plasmopara obducens. It has been reported sporadically in garden impatiens since 2004 but it wasn't until 2011 that widespread outbreaks were observed in landscapes in Massachusetts. This disease affects garden impatiens (Impatiens walleriana), double impatiens or garden balsam (I. balsamina), and the jewelweed species I. pallida and I. capensis. New Guinea impatiens (I. hawkeri) is highly resistant.

Seedlings, young plants, and immature plant tissues are most susceptible to infection. Plants may be stunted and flower buds may abort. Foliar symptoms typically start with a few leaves that appear slightly chlorotic or stippled and become completely yellow over time. Some varieties will have subtle grayish lesions on the upper leaf surface. Leaves may be distorted. White, fuzzy growth eventually appears on the undersides of leaves. Leaves eventually drop, leaving bare stems.

I. walleriana is especially susceptible to downy mildew and plants may collapse rapidly. Other susceptible species may have only mild foliar symptoms and continue to flower.

Short-lived spores called sporangia are produced by the downy white growth on the undersides of infected leaves. These spores will not overwinter but are spread to other plants by wind currents and splashing water. All downy mildew pathogens require a film of moisture on plant leaves in order to germinate and infect the host. It can take 5 days to 2 weeks after infection before plants show symptoms, depending on environmental conditions.

Long-lived spores called oospores are produced inside infected plant tissues and are released into the soil when infected plant debris degrades. Oospores can survive and potentially initiate new infections on Impatiens walleriana planted into the same garden beds for many years. It is not known how long oospores of Plasmopara obducens will survive in the soil. Oospores of other species of Plasmopara are known to be viable for 5-10 years. Research has shown no evidence of seed-borne transmission.

In the landscape, all parts of any infected plants should be removed, including roots and any fallen leaves. The area should not be replanted with susceptible garden impatiens species.

Some impatiens series such as Beacon, Imara, SunPatiens and Bounce are downy mildew resistant and good replacements for susceptible impatiens. Landscapers and home gardeners may also consider including alternatives to garden impatiens in their landscape plans. Other suggested annual plants for shade include winged begonias (DragonWing, BabyWing), bronze-leaf and green-leaf fibrous-rooted begonia, tuberous-rooted begonia, lobelia (upright and trailing) and torenia. Shade annual plants with colorful foliage include, caladium, begonias, coleus, hypoestes and iresine.

Fungicides are ineffective for downy mildew management in the landscape. Fungicides registered for impatiens downy mildew management in the greenhouse include products containing dimethomorph, phosphorus acid, cyazofamid, mandipropamid, mefenoxam, and oxathiapiprolin, among others. For a full list of products, please see the New England Greenhouse Floriculture Guide: http://ag.umass.edu/greenhouse-floriculture/publications-resources/new-england-greenhouse-floriculture-guide