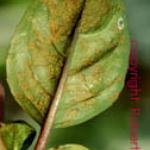 Fuchsia rust is caused by the fungus Pucciniastrum epilobii. The disease occurs throughout the United States and is common in Massachusetts, particularly during the winter months. The most serious losses occur during propagation; however, diseased plants at any stage of growth are unmarketable. Potted plants may recover from this disease but defoliation significantly weakens the plants and occasionally results in death.

The disease may first appear as large circular areas of chlorosis appear on the upper surface of the leaves. Dark green islands may be seen within the chlorotic area. Chlorotic spots may eventually become tan lesions, which may have purple borders on some cultivars. On the undersides of leaves, masses of yellow-orange urediospores are produced. As the disease becomes severe, the spores appear on both sides of the leaves and the circular spots become less distinct. Occasionally, the spores form along the veins. Affected leaves may be deformed and defoliation commonly occurs.

Rust fungi are highly specialized parasites that are dependent on living plants for growth and development. Most have complex life cycles that include up to five different spore stages and two different hosts to complete their life cycle. Pucciniastrum epilobii, the cause of Fuchsia rust, requires both Abies (fir) and Epilobium (fireweed) to complete its lifecycle. Fuchsia is related to fireweed and is also a host of the fungus. The life cycle is as follows. Teliospores, which allow the fungus to survive the winter, form on infected fireweed in autumn (teliospores have not been reported on fuchsia). In the spring, the teliospores germinate and produce basidiospores which infect the needles of various species of fir. Sexual conjugation of the fungus occurs on the fir needles followed by the development and release of aeciospores. The aeciospores can only infect fireweed or fuchsia, and cannot reinfect fir. The fungus then produces urediospores on infected fireweed and fuchsia. The rusty appearing blisters on the foliage contain masses of these urediospores. The urediospores reinfect fireweed and fuchsia repeatedly, but cannot infect fir. Eventually, teliospores are produced and the cycle begins again. The fungus can reside in the greenhouse, spread, and reinfect fuchsia as long as infected fuchsia or fireweed are present.

Many fungicides are registered to control rust diseases on ornamentals, but few list fuchsia on their labels. Do not apply chlorothalonil during bloom to avoid flower injury. Other products may also injure flowers. Products should be tested for phytotoxicity on a small number of plants before applying to the entire crop. Always follow label instructions.