How to Prevent Iron Deficiency in Iron Inefficient Greenhouse Crops 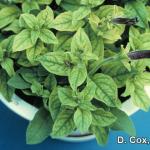 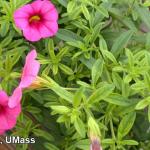 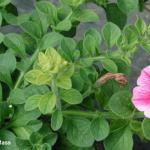 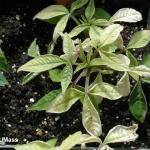 Iron deficiency is a relatively common problem among bedding plants and other spring greenhouse crops. The main symptom of iron (Fe) deficiency is chlorosis, which usually starts at the shoot tips, but more often occurs throughout the entire plant. Iron deficiency symptoms appear as interveinal chlorosis of the youngest foliage when new leaves expand before iron can be taken up by plant roots, because iron is a necessary component of chlorophyll synthesis. In all but the most extreme cases, iron deficiency can be easily mistaken for nitrogen or magnesium deficiency, so a soil or tissue test is necessary to confirm a suspected case of iron deficiency.  In extreme cases, the leaves of some plants turn almost white.

There are three main considerations for preventing Fe deficiency: pH control of the growing media, optimizing phosphorus fertilization, and the use of iron chelate treatments.

Note that there are different forms of iron. Chelated forms are more available to plants at higher soil pH levels compared to iron that is in an unchelated form. Chelated forms of iron are bound to an organic molecule that helps keep the iron dissolved in the soil solution. As long as the chelate holds on to the iron, it is soluble and available for uptake by plant roots. There are also different chelates available, with varying characteristics. Studies have shown the following ranking of iron forms from most effective to least effective as a corrective drench at high pH:

All three chelates are soluble at media pH values of 4.0 to 6.0.

If iron is applied as a drench in a form that is not soluble because of high pH, then most of the nutrient will not be available to plants until media pH is lowered. In studies, iron sulfate tended to be less effective at increasing chlorophyll and resulted in more burning than iron chelates.

Follow label directions for the product you are using. Sprint 330™ and similar Fe chelates are applied as a soil drench or as a foliar spray at the same rate of 4-8 oz./100 gal. (½-¾ tsp gal). The chelate is also soluble enough to make a concentrated solution for injection, but it must be mixed and injected by itself. The company advises not to pre-mix Sprint with pesticide or fertilizer concentrates. Soil drench is the safest method of application; foliar sprays should be tried experimentally first to check for injury or residues. At the recommended rate, Fe chelate can be applied every 3 or 4 weeks if desired. Rinse excess iron off foliage and flowers because concentrated iron can cause brown or black spots. Iron chelate is fast acting, and a response is typically apparent within a few days after treatment.

The information in this fact sheet is intended only for those crops known to have a special requirement for Fe. Some growers struggle with spring crops which are susceptible to Fe toxicity rather than deficiency. These crops include marigolds, zonal geraniums, and seed geraniums and their nutrition should be managed to minimize plant-available Fe; essentially the opposite of the practices described above. This is done by keeping pH in a higher range and avoiding to much Fe fertilization. Applying the treatments described here to plants susceptible to Fe toxicity would be disastrous!