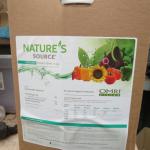 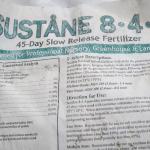 For a number of years I've studied the use of organic fertilizers for growing commercial greenhouse crops. To start I chose to evaluate fertilizers that could be mixed and applied using methods familiar to growers using traditional water-soluble or granular slow-release chemical fertilizers.

Right now I recommend Nature's Source 3-1-1 liquid fertilizer and Sustane 8-4-4 granular slow-release fertilizer. Both of these are readily available, cost effective, OMRI-certified, and have good label directions for greenhouses. I've also evaluated or am currently trialing other organic fertilizers and these are listed with comments in the table accompanying this article. Two liquid fertilizers which may have promise one day are Bombardier 8-0-0 and Espartan 2.0-3.03-2.6 manufactured by Kimitec in Spain. At this time these have limited availability, are rather expensive, and the labels are not written for greenhouses. Nature's Source, Bombardier, and Espartan are plant extract fertilizers and Sustane is made from poultry wastes.

My work has led me to recommend using different organic fertilizers in combination rather than relying on one fertilizer. I suggest using Nature's Source and Sustane together to take advantages of each fertilizer's strengths. This would be done by incorporating Sustane in the growing medium at planting and then fertilizing on a regular basis with Nature's Source starting about 4 weeks after planting. Combinations should be considered regardless of what brands or types of organic fertilizer are being used.

Here are some more important specific recommendations on how to use organic fertilizers to grow greenhouse plants.

1. Mixing and application. The fish fertilizers and plant extract fertilizers are sold as concentrates and they must be diluted in water to be safe for plants. Nature's Source, Bombardier, and Espartan have a pleasant "beery" aroma as concentrates, but within 7 days of being mixed with water they "spoil" and develop very unpleasant odors. The odor, however, is not as bad as fish fertilizer. The nutrient value of spoiled fertilizer is unknown and the colonies of bacteria which develop may plug irrigation lines, so diluted fertilizer solution should be used as soon as possible after mixing.

Sustane is a granular fertilizer which would be mixed with the growing medium before planting. It is the easiest organic nutrient source to use in combination with the liquid types.

2. Fertilizer analysis. Some organic fertilizers supply only one or two of the NPK elements; an example is Bombardier which is 8-0-0. So a grower using Bombardier would have to use other fertilizer(s) to supply P and K. I recommend Sustane which has an 8-4-4 analysis or some other complete NPK granular organic fertilizer.

3. Nutrient disorders. Plants may develop an overall light green or yellowed color caused by a general nutrient deficiency or, more likely, just N deficiency. For example, if Sustane is used alone the symptoms might occur about 45 days after planting, the end of its release time.  This can be prevented by applying an organic liquid fertilizer supplement about 30 days after planting.

Interveinal chlorosis sometimes occurs about halfway through cropping time if plants are fertilized with some liquid organic fertilizers alone starting at planting. This chlorosis is most likely caused by an accumulation of too much ammonium-nitrogen in the plant, so-called "ammonium toxicity". Most greenhouse crops do best with a combination of ammonium and nitrate nitrogen. Unfortunately organic fertilizers generally don't contain nitrate-nitrogen. The best approach is to rely on Sustane as the sole source of nutrients for the first month after planting and then start applying Nature's Source or another liquid organic fertilizer.

4. Organic fertilizer effects on growth medium soluble salts (EC). Sustane is a slow-release fertilizer and its use results in low EC, and potentially a deficient level after 45 days. As for the liquid organics, at the same N level the lowest EC results from Nature's Source (similar to chemical fertilizer) and then Bombardier. Espartan results in an EC significantly higher than the other liquid organic fertilizers which might be an aggravating factor in ammonium toxicity. In short, from the standpoint of EC, Nature's Source is the best.

5. Overcome reduced size caused by organic fertilizers. Many growers who have used organic fertilizers have observed size reductions compared to what they are used to with chemical fertilizers. Some growers say "raise the rate (ppm)" of organics to compensate. If you have done this and it works, carry-on! Otherwise give it a try starting with increases of 20% at a time. Increasing the rate in 20% increments is likely to be partially successful, but because of a nutrient imbalance, ammonium toxicity, or some unknown factor results may be disappointing or worse.

6. Plant species-specific responses. It seems that plants may respond differently to organic fertilizers. For example, marigolds and petunia grow as well fertilized with a combination of liquids and Sustane as they do with chemical fertilizer, but seed geraniums do not and are very prone to chlorosis from too much ammonium. At this point in the development of organic fertilizers for commercial greenhouse use, use them with caution on plants you know have exacting nutrient requirements or those prone to foliar chlorosis. Fertilizers should always be tried first on a small number of plants.

7. Best uses. The fertilizers discussed in this fact sheet are probably best for short-term crops of less than 6 weeks duration when environmental conditions are most favorable for plant growth (e.g., April-September). Bedding plants, herbs, and vegetable transplants are good candidates for trying organics. Assuming the plants are of good quality and color, reduce or stop using the fertilizer within a week or two of planned marketing. This practice will reduce the chance of ammonium toxicity symptoms.