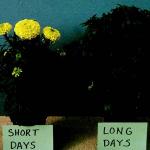 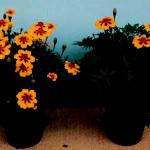 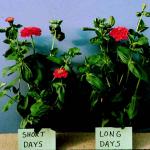 Many growers are using photoperiod manipulation to control the flowering of bedding plants and other annuals and also as a method of energy conservation. In most cases bedding plant growers use photoperiod to shorten crop time. Many species of common annuals are
known to respond to photoperiod and they are classified into five response groups (Table 1).

Bedding plants are either long-day, short-day, or day neutral in response to photoperiod. Some long-day species are "obligate" (or "qualitative") long-day plants meaning that they require daylengths longer than a certain critical length in order to flower. Other long-day species are "facultative" (or "qualitative") long-day plants. These plants initiate flowers under any daylength, but flower earlier with long-days. Snapdragon, sunflower, salvia, and petunia are some of the important long-day annual species.

Like long-day species, short-day plants have either an obligate or a facultative response to photoperiod; the former type requires a daylength shorter than a certain critical daylength while the latter type flowers under any daylength, but earlier with short days. African marigolds, cosmos, celosia, and zinnia are important short-day species.

It should be noted that there is some is some disagreement about the photoperiod response of certain species. For example, sometimes African marigolds (Tagates erecta) are classified as facultative, rather than obligate short-day plants as in Table 1 (Figure 1).
Also, some varieties of French marigold (T. patula), like 'Naughty Marietta' (Figure 2), seem to be facultative short-day instead of day neutral plants as in Table 1. Zinnia (Figure 3) may or may not respond to short days.

There can be considerable variation in response to photoperiod among varieties of the same species. For example, the 'Lady', 'Galore', and 'Jubilee.

Generally, short-day plants flower when the daylength is shorter than 11 hours and long-day plants will flower when the daylength is longer than 14-16 hours (Warner, 2006). Keep in mind, however, that the critical daylength is likely to be somewhat different for each species. A traditional blackcloth system is used to shorten daylength. The amount of area covered by black cloth can be small because many species are treated for only 2-3 weeks in the seedling stage. Cloth is pulled at 4 PM and removed at 8 AM, daily.

Daylength is increased for long-day plants by continuous or cyclical night-lighting with incandescent bulbs 4-6 hours each night or by daylength extension with HPS lamps. A minimum of 10 footcandles of light intensity is necessary for night-lighting systems.

Some ways to use photoperiod

The first example, the inspiration for this article, was a mistake I made several years ago growing annual and bedding plant specimens for my herbaceous plants course. I needed to have specimens ready to view by the last week in January and therefore I had to start seeds during November. Obviously this is the time of year when daylength is shortest. I normally use what amounts to daylength extension with HPS lamps, lighting the plants daily from 6 AM to 8PM (14 hour day) beginning at germination, but one year I forgot to start the lighting system. The result was early-flowering and too short short-day plants like marigolds, celosia, cosmos, and some zinnia types; they were poor examples of what the plants would be like in the landscape. Also, long-day petunias were very compact (but nicely branched) and developed no flowers until it was almost too late to use in class. Using daylength extension to create long days for very early crops would have built larger plants and slowed the flowering of short-day plants, but speeded up the flowering of long-day species.

A second example, related to the first, concerns the flowering of facultative short-day African marigolds. The critical daylength for these plants is about 11 hours. In New England, if the seed is sown before 15 February natural short days will accelerate flowering with the result being what I observed in my "mistake". On the other hand, if seed is sown after 20 February when daylength is longer than the critical daylength flowering will be delayed and the plants will grow tall. Black cloth is needed here. This applies to the 'Lady', 'Galore', and 'Jubilee' series mentioned earlier.

Finally, most growers using photoperiod control on annuals do so to shorten crop time and perhaps save some energy by being able to delay seeding/planting. This approach is used with success on long-day species. Plugs are provided with long days by night-lighting beginning during the last two weeks before transplanting until flower buds become visible after transplanting. Night-lighting is not needed after early April when days become naturally long.