Reducing Storm Damage to Your Greenhouses 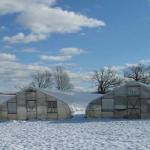 Nature seems to be getting more violent in recent years with frequent earthquakes, increased numbers of hurricanes and record breaking snowstorms. Insurance damage claims have increased considerably. The International Building Code has revised upward its wind and snow loading requirements for some areas of the U.S.

Each year there are reports of greenhouses that have been damaged by weather and natural events. Greenhouse design is different than conventional farm buildings in that the structural profile has to be small to allow maximum light to reach the plants. Most farm buildings are over designed to handle severe weather conditions.

Damage to greenhouses can include racking of the frame, bending of the hoops, broken glass or torn plastic and uplifted foundation posts. Preparation ahead of time can minimize the damage.

Wind forces that act on a greenhouse are influenced by numerous factors including the basics wind speed, building orientation, exposure, height and shape of doors or vents that may be open. The wind passing over a greenhouse creates a positive pressure on the windward side and a negative pressure on the leeward side. These can combine to create a force that wants to collapse or overturn the building. An 80 mph wind can produce a pressure of 16 pounds per square foot (psf). For example, the 10' by 100' sidewall of a gutter-connected greenhouse would have to resist a 16,000 pound force.

Wind can also create a force similar to an aircraft wing that wants to lift the greenhouse off the ground. An 80 mph wind blowing perpendicular to the side of a 28' x 100' hoophouse can create a lifting force of 220 pounds per foot of length or 22,000 pounds of uplift on the whole structure. When you consider the total weight of materials and equipment in the greenhouse is about 6000 pounds, the foundation must have a withdrawl resistance of about 300 pounds each. This is why building inspectors frequently require that the posts be surrounded by concrete.

Although you have no control over the force or direction of severe winds, here are a few tips to help minimize storm damage:

Snow that accumulates on a greenhouse can put significant weight on the structural members. Snow loads vary considerably from 0 along the southern coastline to more than 100 pounds per square foot in Northern Maine. Local building codes specify the design snow load.

The following are a few pointers to consider before the next snow season:

Selection of greenhouses that meet the International Building Code and good construction techniques are important considerations when building new greenhouses. A little preparation before a storm can minimize damage from severe weather events.

Resources for storm preparation and response