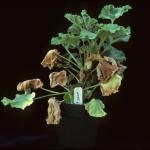 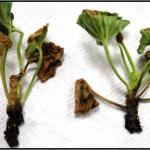 Southern bacterial wilt of geraniums is caused by two races of R. solanacearum, Race 1 and Race 3. Race 1 is found in the southern United States, and has occasionally affected geraniums in greenhouses or landscapes. Race 3, however, is not found in the United States, and is therefore regulated by a federal quarantine. R. solanacearum Race 3, Biovar 2, has valuable agricultural hosts as well as a few known ornamental hosts. It is of special concern to the potato industry in the United States and Canada, because Race 3 is a cold-temperature tolerant strain that has caused serious disease problems in potato crops in other temperate countries around the world.

Both races 1 and 3 of R. solanacearum produce symptoms that are very similar to those caused by Xanthomonas pelargonii. The main difference is that Ralstonia will cause wilting along with leaf yellowing and necrosis, whereas Xanthomonas can cause tiny, round leaf spots as well as wilt. Xanthomonas is only able to affect plants in the Geraniaceae family (including Pelargoniums and hardy geraniums). Ralstonia infects some ornamentals and vegetables within the Solanaceae family. Ralstonia is spread primarily within diseased cuttings, and can be transmitted from root system to root system by water movement such as recirculating subirrigation systems. Another method of transmission is through vegetative propagation of infected mother plants. Ralstonia is soil-borne and is not expected to be spread by overhead irrigation unless there was puddling around pot bases.

What to do with suspicious plants

Since this is a regulated disease, any suspicious looking wilting plants, along with pots and soil, should be placed into sturdy garbage bags right at the bench and then held in a cool area until they can be tested. Don't carry pots with wilted plants out of the greenhouse; instead, bring the bag to them so that potentially contaminated growing medium won't be dropped on the floor. Do not discard wilted plants until a diagnosis is confirmed. Benches may be disinfected with a quaternary ammonium compound.

Don't assume that you have Ralstonia: remember that several different diseases and abiotic issues can cause symptoms similar to Southern bacterial wilt, so obtaining an accurate diagnosis is critical. For information on sample submission, please see the UMass Extension Plant Diagnostic Laboratory website or call (413) 545-3208. If Ralstonia is confirmed by the the lab, contact your supplier.