What’s in a name? A lot, it turns out, when it comes to powdery and downy mildews. Though the common names of these two diseases sound similar, the organisms that cause them are actually very different from each other.

Powdery mildews are caused by a large group of true fungi. Spores germinate and directly penetrate the epidermal cells of the host plant, and with a few exceptions, infections do not progress any further into host tissues. Although the infection is rather superficial, a severe case of powdery mildew can lead to leaf death and defoliation. Powdery white masses of spore-bearing structures are typically produced on the upper sides of leaves, although they may also be seen on the undersides.

Downy mildews are caused by a few different genera of Oomycetes. More closely related to algae than the true fungi, the Oomycete group also includes Pythium and Phytophthora. After spore germination, downy mildews penetrate the host through the stomata and grow throughout the leaf tissue. After the infection is established, the organism reemerges through the stomata and spores are formed, thus producing the characteristic fuzzy white, purple, or brownish growth on the undersides of leaves. In advanced cases, weakened host tissues may allow some downy mildews to emerge on the upper sides of leaves as well.

Both powdery and downy mildews are highly host specific, meaning that they typically affect a single genus or closely related genera in one plant family. Both pathogens thrive in conditions of high humidity; however, powdery mildew is actually inhibited by free moisture on plant surfaces, while downy mildew is not. Both diseases can be mitigated in the greenhouse through cultural practices such as sanitation, proper ventilation and plant spacing, increasing air flow, avoiding overhead irrigation when possible, and growing disease tolerant or resistant cultivars when available. Most of the fungicides used to prevent powdery mildews are not effective against downy mildew. One exception to this general rule is azoxystrobin. For up to date information on fungicides labeled for use in greenhouses, consult the New England Greenhouse Management Guide. 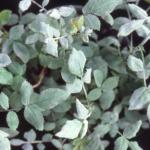 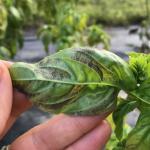